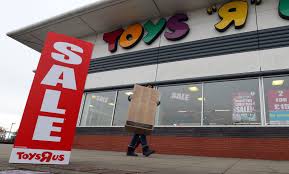 Fifteen percent of U.S. toy revenue. With that kind of market share, Toys ‘R’ Us should be in a comfortable position, not on the ropes.

And yet, the toy chain’s U.S. division, which entered bankruptcy in September, now looks like it might be liquidated after so far failing to find a buyer or reach a debt restructuring deal with lenders. The liquidation would hurt more than just Toys ‘R’ Us. Toymakers, from large companies like Mattel to small companies with new products, will take a hit.

Toys ‘R’ Us started the year with more than 800 stores in the U.S. under both the Toys ‘R’ Us and Babies ‘R’ Us brands. In January, it announced 180 locations would be closed.

So how did Toys ‘R’ Us get here? While Amazon is an easy scapegoat, it’s not all about the rise of e-commerce.

The deal left Toys ‘R’ Us with a $ 5.2 billion albatross of debt around its neck. The interest payments—$ 400 million a year—left the company weak and ripe for toppling.

The crushing debt made the initial blow. Amazon and the rise of online commerce was what delivered the final push into bankruptcy. And don’t forget about the rise of mobile and tablet games. Those haven’t helped either.