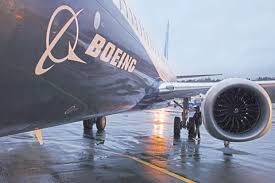 Boeing is the hottest stock in the Dow. Again

One stock has been able to steer clear of all the recent market turbulence: Boeing.
Shares of the aerospace and defense giant are up more than 20% so far in 2018 — making it the best performer in the Dow Jones Industrial Average. Boeing (BA) was the top Dow stock of 2017 too, surging nearly 90%.

Boeing has benefited from strong airline orders for its 737 MAX 8 and 787 Dreamliner planes. That is helping to offset poor results in its defense business, which reported a 7% drop in sales in 2017.

The company is expecting that defense, space and security sales will rebound a bit this year. But it’s worth noting this division accounts for just 22% of expected 2018 revenue.

Boeing forecasts that its commercial airplane unit will bring in 62% of overall revenue. (The remainder comes from its services division.)

And the commercial jet business is booming as major airlines around the globe are upgrading their fleets.

That is helping Boeing’s top European rival Airbus too. Shares of Airbus (EADSF) are up 20% this year, following a 50% pop last year.

Boeing also got a lift earlier this week after the company reached an agreement with the White House on a deal to build two new Air Force One planes.

President Trump had previously criticized Boeing for the cost of the Air Force One, tweeting after the election that he wanted to cancel the government’s contract with Boeing.

Boeing is building a brand new 747 Air Force One for future presidents, but costs are out of control, more than $ 4 billion. Cancel order!

But cooler heads have apparently prevailed.

Even though the new deal — which will cost the government $ 3.9 billion — may sound like not much of a discount to the $ 4 billion Trump originally complained about, both the White House and Boeing have since said that number was incorrect and the original price for Air Force One was actually $ 5 billion.

Boeing even tweeted out a congratulations to the president this week for getting a better deal for American taxpayers.

Boeing is proud to build the next generation of Air Force One, providing American Presidents with a flying White House at outstanding value to taxpayers. President Trump negotiated a good deal on behalf of the American people. pic.twitter.com/m0HtGfXVlv

So can Boeing continue to surge even while the broader market remains volatile and investors fret about the possibility that new Federal Reserve chief Jerome Powell may raise interest rates more rapidly than they had originally expected?

It looks that way. And analysts have been busy lifting their earnings estimates for Boeing, thanks largely due to the healthy demand for new commercial jets.

Ten analysts have boosted their profit targets for 2018 and 2019 during the past month.

Related: Boeing vs. Airbus: $ 77 billion in deals in under 2 hours

Wall Street is now forecasting that Boeing’s earnings per share will surge 37% this year and jump another 19% in 2018. That’s double the expected growth rates for the S&P 500.

Shares are trading about 25 times earnings estimates for 2018, a pretty sizable premium to the S&P 500’s valuation of 17 times this year’s profit projections.

But in a market that’s suddenly turned unpredictable, investors may be better off sticking with proven winners.

Boeing has new orders for planes locked in — and that’s not going to change even if the Fed starts raising rates at a faster clip and bond yields spike.

So the skies continue to look clear for Boeing.