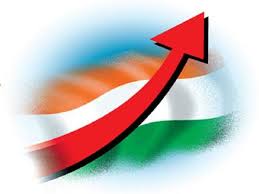 India regained its status as the world’s fastest growing major economy in the October-December quarter, surpassing China for the first time in a year as government spending, manufacturing and services all picked up.

Asia’s third-largest economy grew 7.2 percent in the December quarter, its fastest in five quarters, Ministry of Statistics data showed on Wednesday. That beat China’s 6.8 percent and a forecast of 6.9 percent by analysts polled by Reuters.

In a data set that some economists said had put an early interest rate hike on the agenda, India also edged up its 2017/18 GDP growth forecast to 6.6 percent from 6.5 percent.

India’s manufacturers and service industries have been struggling to overcome disruptions from the bumpy launch of a national sales tax in July.

In the December quarter, annual growth in the manufacturing sector however climbed to 8.1 percent from 6.9 percent in the previous quarter, while financial and other services grew at 7.2 percent from 5.6 percent.

“Settling down of Goods and Services Tax (GST) reforms will boost growth in the next fiscal year,” said Anita Gandhi, a director at Arihant Capital Markets.

Some economists now anticipate the Reserve Bank of India (RBI), which is trying to balance concern over inflation with support for growth, could raise interest rates after its next policy meeting on April 5.

Retail inflation eased marginally to 5.1 percent in January from a 17-month high of 5.2 percent in December.

Urjit Patel, RBI governor, this month said the economic recovery was at a nascent stage and called for a cautious approach.

Last week, he told industrialists that his government was determined to put the economy back on a higher growth trajectory, but it is still far from firing on all cylinders.

Meanwhile, he is trying to accelerate growth through higher state spending, including 2.1 trillion rupees ($ 32.4 billion) for the recapitalisation of state banks, which are beset with mounting bad loans of nearly $ 148 billion.

He has stepped up spending on infrastructure and welfare projects to boost growth ahead of national elections in 2019.

This has widened the fiscal deficit for the year ending in March, to 3.5 percent of GDP from the 3.2 percent projected earlier.

Creating jobs for near one million youth entering the market every month has been a key challenge, and he raised import tax on near 50 items this month to support domestic manufacturers.

Higher oil prices and increased pressure on market borrowings from government have already increased bond yields and this is likely to hit private investment and growth further.

Growth in factory activity slowed to a four-month low in February as new orders eased and weighed on output after manufacturers raised prices at the fastest pace in a year, a private business survey showed on Wednesday.

“There are concerns of a rising fiscal deficit and the possibility of interest rates rising further,” Gandhi said.