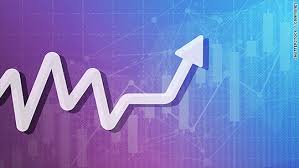 February was an insane month for the stock market

A profound inflation scare. Not one but two 1,000-point plunges for the Dow. And a powerful comeback that almost went straight back up.

February was easily one of Wall Street’s wildest months since 2008.

The Dow plummeted more than 3,200 points, or 12%, in just two weeks. Then stocks raced back to life, recovering about two-thirds of those losses. The market insanity was even more startling because it followed a period of extreme calm. And it arrived during a roaring economy.

In early February, the runaway train stock market ran smack into spiking bond rates that were pricing in the threat of inflation. Investors suddenly became worried the economy, boosted by huge tax cuts, could overheated and force the Federal Reserve to raise interest rates.

It certainly didn’t help that the post-election surge had left stocks relatively expensive — and vulnerable to a sharp pullback.

“February will be remembered as the month where fear of unbridled inflation met with valuations well beyond historical norms,” said Peter Kenny, senior market strategist at the Global Markets Advisory Group.

Inflation fears have caused the Dow and S&P 500 to do something they haven’t in 11 months: decline. Both indexes are on track for their worst month in two years.

And yet it took very little time for the market to storm back off the lows as investors, emboldened by the strong economy and soaring profits, jumped into the fray to buy stocks. All three major indexes are up again for the year, and the Nasdaq is down just 1% for the month.

“The rebound has been very dramatic, very much a V-shaped comeback,” Kenny said.

Related: Problem with rising rates: Corporate America has a ton of debt

Even though the market has bounced back, the recovery is fragile — and remains subject to the whims of the bond market.

Just look at how the Dow dropped 299 points on Tuesday after the 10-year Treasury rate crept closer to 3%. The sell-off, driven by Fed chief Jerome Powell’s upbeat outlook on the economy and inflation, sent the VIX (VIX) volatility index spiking again.

The fear is that a sudden inflation spike will cause the Fed to cool the economy off by aggressively raising rates, ending the party on Wall Street.

“The question is whether inflation rises at such a swift rate that it creates a headwind for the market,” said David Joy, chief market strategist at Ameriprise.

Wall Street is glued to the 10-year Treasury rate because it helps set the price on virtually all other assets. When rates are low, like they had been, it means bonds aren’t returning much money, and it encourages investors to gamble on riskier assets like stocks.

Higher rates make bonds look a bit more attractive and raise the cost of borrowing on mortgages and other loans.

Rates have been on the rise because of the strengthening economy and a spending splurge by the federal government that will force it to borrow more money.

The market turmoil started with inflation and bond market concerns. But the early February nosedive may have been exacerbated by the implosion of little-known investments used to bet that markets will stay calm.

When the markets were placid, as they were for months, those bets were lucrative. When the Dow plummeted 1,175 points on February 5, they blew up.

Some analysts believe the breakdown of these complex volatility instruments may have caused the selling to snowball.

“That amplified the sell-off into a full-out nerve-wracking correction,” Yardeni said.

Ameriprise’s Joy said that once the short volatility trade calmed down, so did the markets. “It was a one-time thing that caught people on the wrong side,” he said.

Related: Powell is confident ‘good years’ are ahead

The question now is whether the market is out of the woods or whether stocks will head back down to the lows of February 9.

If inflation really is heating up or bond yields spike, more turmoil could follow.

But if not, investors have a lot to smile about. The outlook for the U.S. economy remains robust. Consumer confidence hit a new 17-year high in February.

And corporate profits, the real driver of stock prices, are booming. Fourth-quarter S&P 500 earnings are up an estimated 15% and are on track to be the best in six years, according to FactSet. Thanks to the corporate tax cut and improving economy, 2018 profits are expected to surge by 18%.

Yardeni said he thinks the market has seen its lows for now.

“The market can live with inflation,” Yardeni said, “as long as it’s not at a pace that forces the Fed to raise rates to levels that it causes a recession