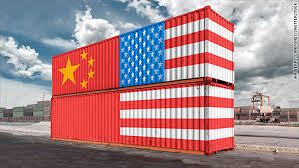 As trade tensions escalate between the US and China, one of President Xi Jinping’s most trusted advisers is paying a visit to Washington.
Liu He, a Harvard graduate and senior Chinese Communist Party official, is in the US this week to talk about trade and other issues affecting the relationship between the world’s two largest economies.

Experts say his mission appears to be an effort by Beijing to dial down the tensions that President Trump has helped fuel with recent tariffs on solar panels and threats of more punishing measures to come.

China “still holds out hope that it can persuade the Trump administration to back off,” said Scott Kennedy, an expert on the Chinese economy at the Center for Strategic & International Studies.

Related: Trump-China trade war: Who has the most to lose?

China’s foreign ministry confirmed that Liu would discuss trade and the broader relationship between the world’s two biggest economies but did not say which US officials he would meet.

Trump has until April to decide whether to impose tough restrictions on steel and aluminum imports. He’s also suggested he’ll take action against China over intellectual property abuses.

Beijing is “worried” about the prospect of more tariffs on Chinese exports, but is also confident that it could outlast the US if a full-blown trade war were to break out, Kennedy added.

China has shown it has ways to respond. It has launched a probe into US exports of sorghum, a crop used to feed livestock. American soybean farmers fear their $ 14 billion annual exports to China could be in the cross hairs next.

Liu, the man representing China in talks with US officials this week, “more than anyone else enjoys Xi’s trust” on the economy, said James Wang, an associate professor of economics at the City University of Hong Kong.

A former schoolmate of the Chinese president, Liu is a key architect of China’s economic policy during Xi’s presidency. Recently he’s been taking on more responsibility — and a more visible role.

Last year, he became a member of the Communist Party’s Politburo, one of China’s main decision-making bodies.

In a speech at the World Economic Forum in Davos last month he reiterated the globalist message delivered by Xi at the same event a year earlier.

He’s likely to have a tougher job trying to win over Trump administration officials in Washington, however.

“I do not think he’ll find a receptive audience,” Kennedy said. He said Liu doesn’t have much of a relationship with Trump administration officials and will struggle to convince them that China really wants to open its markets.

But Song Guoyuo, deputy director of the Center for American Studies at Shanghai’s Fudan University, was more optimistic, suggesting Liu “could be a bridge between China and the US.”

“He is open, practical and flexible,” Song said.

Liu may try to diffuse the threat of a trade war by offering to buy more petroleum and agricultural products from the US, or opening up new sectors of China’s economy to foreign investors, according to Wang.

That kind of approach may fall on deaf ears, though. After making little progress in a series of trade talks with China last year, Trump and his top officials have signaled they are taking a harder line this year.

Trump is seeking to reshape the nature of US trade with China, which he has blamed for the loss of huge numbers of American manufacturing jobs.

The US trade deficit in goods with China soared to $ 375 billion last year, according to the US Census Bureau. Trump often cites the trade deficit as a key measure of economic relations between two countries.