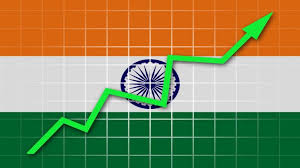 India’s economy grew at its fastest pace in a year in the October-December quarter as consumers, businesses and the government stepped up spending, a Reuters poll predicted.

This suggests that disruptions from a shock ban on high-value currency notes in November 2016 and the chaotic launch of a goods and services tax (GST) in July are fading.

Gross domestic product grew 6.9 percent in the October-December quarter from a year earlier, according to the poll of more than 35 economists, taken over the past week.

In July-September, the economy grew 6.3 percent annually, a return to a faster growth trajectory after five consecutive quarters of slowdown.

In the latest quarter, “government spending was stronger and private consumption demand was robust as well, as seen in strong growth in auto sales,” said Abhishek Upadhyay, economist at ICICI Securities PD.

“Recent buoyancy in indicators such as cement output also points to recovery in segments such as construction, and real estate that were hit most from demonetization.”

Still, growth in the world’s seventh largest economy is far from the near-double digits pace recorded during the years before the financial crisis.

What has also weighed on the economy is exports, which took a hit last year from an appreciating rupee, which strengthened 6.5 percent against the dollar in 2017.

While down around 1 percent this year, the rupee is not expected to weaken significantly, according to a separate Reuters poll of foreign exchange strategists.

CONCERN ON BANKING
Economists in the latest poll were also concerned about the increase in non-performing assets of state-run banks, and said if they are not handled effectively it would hurt economic activity.

The fraud has cast a shadow over the workings of state-run lenders, already reeling from accumulated bad loans accumulated that are higher than those of banks in most major economies.

While stress on bank balance sheets is a drag and the clean-up exercise “may still take time”, it’s likely that economic growth should get better, Upadhyay said.

The poll also predicted India’s gross value-added (GVA) – the growth measure that the government prefers – increased 6.6 percent from a year earlier in October-December from a year earlier, compared to 6.1 percent in the prior three months.

That should provide some relief to the Reserve Bank of India which is performing a delicate balancing act of monitoring inflation and nurturing growth.

Retail inflation eased in January after a 17-month spike in December, but was still above the 4 percent medium-term target of the central bank.

While the RBI kept rates on hold at its Feb. 7 meeting, the minutes showed monetary committee members concerned about the rising inflation rate.