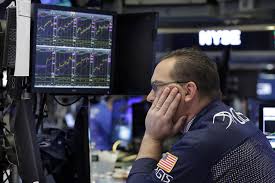 Why 3% is the scariest number for stocks

The Dow has recovered almost two-thirds of the ground it lost during the sell-off earlier this month. Yet stocks remain fragile — and subject to the whims of the bond market.

Each time the yield on the 10-year Treasury note creeps closer to 3%, a level not seen in four years, fears re-emerge about inflation and a less friendly Federal Reserve.

“It really is quite amazing how quickly sentiment toward the market has shifted,” Bespoke Investment Group wrote in a recent report. “A fog of unease has definitely set in as investors fret over the Fed, rising interest rates and inflation.”

After starting the year at just 2.4%, the 10-year yield spiked to a four-year high above 2.95% on Wednesday. That freaked Wall Street out. A 303-point surge on the Dow disappeared.

Even market optimists warn that a climb above 3% could cause turbulence that would rival the plunge that began three weeks ago.

“3% is still hanging like a sword of Damocles over risky assets, and that’s not going away,” Michael Block, chief market strategist at Rhino Trading Partners, wrote in a recent report.

A “painful break” in bonds would probably drive the S&P 500 back toward its February 9 low of 2,592. That’s roughly 5% below its current level.

Of course, a 3% Treasury yield is no reason to panic. It remains very low historically. And the U.S. economy may be strong enough to withstand the sell-off in the bond market that’s driving yields higher.

But the relentless climb in bond rates is a big deal because the 10-year Treasury yield helps set the price for virtually all other assets. Years of low yields on safe bonds sent cash pouring into risky stocks and pumped up their values. A reversal of that trend could slow the stock market down.

Higher Treasury yields also increase the cost of borrowing for businesses, consumers and, of course, the federal government. Mortgage rates have already climbed to levels last seen in April 2014.

Rates have been rising because of the strengthening economy, stronger inflation and the growing federal deficit, which is forcing the U.S. Treasury to issue more debt.

Bank of America(BAC) expects Treasury’s total borrowing needs to nearly double from last year to over $ 1 trillion in the next two fiscal years. The bank on Friday upgraded its year-end forecast for the 10-year Treasury to 3.25%.

“We believe that rates in the U.S. can continue to reprice higher,” Bank of America wrote.

That suggests stocks may be in for a bumpy ride.

2. Powell takes the stage: Jerome Powell makes his first trip to Capitol Hill as Fed chairman this week. He will present the Fed’s twice-a-year monetary policy report to a House committee on Tuesday and a Senate committee on Thursday.

Lawmakers are expected to press Powell for his views on the economy and signs of increasing inflation. Investors will be watching for clues about whether the Fed might raise interest rates more often or more steeply than planned. The markets expect three rate hikes this year and two in 2019.

3. NAFTA talks: Representatives from Canada, Mexico and the United States meet in Mexico City this week for the seventh round of talks on rewriting the trade deal. Discussions are scheduled through March 5.

The negotiations have no expiration date, but this is the last scheduled round. And a deal will become much more difficult when the Mexican presidential campaign kicks off in March. If negotiators want to reach a deal, they need to do it now.

Negotiators made little progress during the last round. They failed to agree on divisive issues like auto manufacturing. If leaders don’t reach a deal in Mexico City, negotiations could be pushed off for another year -— or the agreement could fall apart altogether.

4. Checking in on retail: Several struggling retailers report earnings this week. Macy’s (M) is set to report on Tuesday. L Brands (LB) and TJX (TJX) plan to share results on Wednesday, as does Lowe’s (LOW), which has mostly avoided the troubles plaguing the retail industry.

Kohl’s(KSS), Nordstrom (JWN) and Gap (GPS) are on deck for Thursday. And Foot Locker (FL) and JCPenney (JCP) report Friday.