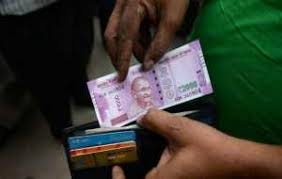 The Indian rupee slid to a near three-month low on Tuesday amid growing concerns about an alleged major bank fraud at India’s second-largest state-run lender, whilst emerging stocks fell half a percent.

The rupee fell 0.9 percent against the dollar to its weakest since mid-November as investors eyed the potential broader implications from the alleged $ 1.77 billion Punjab National Bank (PNB) loan fraud.

Investors have also been unsettled by India’s trade deficit hitting its highest in over 4-1/2 years in January.

PNB’s shares were down 1.2 percent in their fifth straight day of losses, trading at 1-1/2 year lows. The stock has shed more than a quarter of its market capitalisation since the fraud was first disclosed on Feb. 12.

Ratings agency Moody’s has placed the bank’s credit ratings under review for a downgrade, while assuming a very high probability of government support for PNB.

Investors are concerned that the broader Indian banking sector could take a hit of more than $ 3 billion from loans and corporate guarantees provided to diamond companies at the centre of the massive alleged fraud.

But India’s bank stocks index rebounded 0.7 percent after slumping to a four-month low on Monday.

“The whole thing did come as a big surprise and markets will be looking to see what implications this has for ratings in the banking system in India as a whole,” said Simon Quijano-Evans, an emerging markets strategist at Legal & General Investment Management.

Other emerging currencies were also on the backfoot as the dollar rebounded 0.6 percent from a three-year low.

South Africa’s rand was among the underperformers, slipping 0.7 percent from the three-year peak it scaled last Friday.

Investors are focusing on an expected cabinet reshuffle under new President Cyril Ramaphosa and the future of the Finance Minister Malusi Gigaba, who is due to deliver the budget speech on Wednesday.

The South African central bank’s leading business cycle indicator fell 0.5 percent month-on-month in December, in another sign Ramaphosa will have his work cut out turning around the ailing economy.

Quijano-Evans said it wasn’t a surprise to see some of the steam come out of the rand, which has rallied hard since the beginning of December on expectations of reform under Ramaphosa.

The falls were led by tech shares such as Samsung Electronics, which lost over two percent. Hong Kong shares also slipped 0.8 percent on the bourse’s first day back after the Lunar New Year holiday.

Emerging European bourses were also mostly in the red, whilst the Hungarian forint and Polish zloty fell 0.2-0.3 percent against the euro.