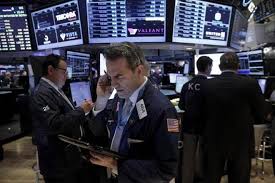 In afternoon trading, the S&P 500 briefly broke below its 200-day moving average, a level seen as technical support, and then cut losses, a day after a plunge that confirmed a correction for the U.S. market.

Concerns about higher bond yields and interest rates spurred recent selling of equities, disrupting an extended advance in stocks, though the retreat in the market had been long awaited by investors.

Equity markets in Europe and Asia have been falling as well. On Friday, a key gauge of global stock indexes was down more than 1 percent, while European shares ended down 1.4 percent.

On Thursday, the Dow and S&P 500 indexes slumped more than 10 percent from their Jan. 26 record highs, confirming they were in correction territory and leaving investors wondering when the market’s recent slump would find a floor. Friday’s trading saw an 849-point trading range for the Dow.

“I thought we were close to a bottom a couple of days ago, but it looks like we’re in the standard path, which is a selloff, a rebound and then a retest of the low,” said Bucky Hellwig, senior vice president at BB&T Wealth Management in Birmingham.

“I’d like to see buying come in late in the day instead of having a selloff like we had yesterday.”

Higher yields tend to hurt equities because they increase borrowing costs for companies and ultimately consumers. They also present an alternative to investors who may reallocate some funds to bonds from equities.

Next week, coming off one of the most volatile stretches in years, two important readings on U.S. inflation could help determine whether the stock market begins to settle or if another bout of volatility is in store.

European shares fell 5.3 percent for the week, their biggest weekly drop since January 2016.

The pan-European FTSEurofirst 300 index lost 1.40 percent and MSCI’s gauge of stocks across the globe shed 0.49 percent.

Earlier, the Shanghai Composite Index tumbled as much as 6.0 percent to its lowest since May 2017, and the blue chip CSI300 index dived 6.1 percent.

Chinese equities were hurt by the drop in global shares and by traders closing positions before the Lunar New Year holidays starting next week.

The U.S. House of Representatives joined the Senate early on Friday in approving a budget bill that raises military and domestic spending by almost $ 300 billion over the next two years. With no offsets in the form of other spending cuts or new tax revenue, that additional outlay will be financed with borrowed money.

In currencies, the dollar clung to its earlier gains against a basket of currencies as Wall Street’s major indexes edged up.

Additional reporting by Karen Brettell in New York and Marc Jones in London; Editing by Bernadette Baum and Nick Zieminski