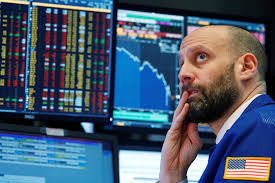 The stunning rout in U.S. stocks has spread to Asia.

Those sharp falls came after a brutal trading session in U.S. markets on Monday. The Dow closed down 1,175 points, or 4.6%. It was by far the index’s biggest ever point decline for a single trading day.

And Wall Street looks set for another rough ride on Tuesday. Dow futures are currently pointing to a drop of more than 570 points, or 2.4%.

“Traders are getting nervous there is more to come,” said Greg McKenna, chief market strategist at currency trading platform AxiTrader.

Selling on global stock markets has ramped up because of expectations the U.S. Federal Reserve could increase interest rates more quickly than previously thought. Higher interest rates can weigh on companies’ earnings and wreak havoc in bond markets.

The growing concerns about the pace of interest rate hikes came after U.S. jobs data on Friday showed wages were growing at their fastest pace since 2009. That’s led to fears that inflation — which has been unusually low in recent years — could be about to make a big comeback.

Related: Market fear is back in a big way

The worries arrived at a time when the Dow and many other major stock indexes were trading near record highs. That had led some experts to warn that markets were overdue for a correction.

The sell-off in Japanese stocks was exacerbated Tuesday as investors flocked to the yen, which is often viewed as a safe haven during periods of market panic, said Jingyi Pan, a strategist at stockbroker IG Group. A stronger yen is bad news for profits at big Japanese exporters.

The Nikkei has been one of Asia’s strongest performing indexes lately, but its plunge this week has now erased all of its gains for the year so far.