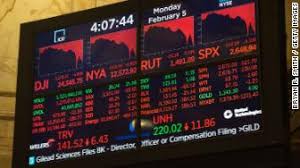 The ride on Wall Street keeps getting bumpier.
The Dow slumped as much as 355 points just after the opening bell Monday — then raced back almost to break-even. The Nasdaq slumped more than 1% but quickly turned positive.

The back-and-forth action is an extension of the volatility that emerged last week because investors are worried about bond market turmoil.

After the market started 2018 with a bang, last week was the worst on Wall Street in two years. The selling gathered steam on Friday when the Dow plunged 666 points, or 2.5%, its worst day since the Brexit mayhem of June 2016. Nearly $ 1 trillion of market value was erased from the S&P 500 last week.

“You had a market that was overbought and ripe for something to undermine its tranquility,” said Mark Luschini, chief investment strategist at Janney Capital.

The nervousness spread to overseas markets on Monday. Major indexes fell 1% in Hong Kong, 1.5% in the U.K. and 2.5% in Japan.

CNNMoney’s Fear & Greed Index is now flashing “fear,” underlining a major shift in market sentiment from a week ago when it was sitting in “extreme greed.” The VIX volatility index jumped 7% on Monday after spiking 50% last week.

Investors’ main concern is the selloff in the bond market. The 10-year Treasury yield, which moves opposite price, spiked to a four-year high of 2.85% on Friday. It’s a dramatic swing from 2.4% at the start of 2018. Higher yields could make normally boring bonds look more attractive when compared with risky stocks.

The U.S. economy looks very healthy right now. Friday’s jobs report showed that wages grew at the fastest pace since 2009. That’s a welcome shift by workers who have been dealing with anemic raises for years.

However, Wall Street is starting to get worried that the “goldilocks” environment of slow growth and mysteriously low inflation may be ending. Stronger inflation would force the Federal Reserve to raise rates more aggressively than investors may be comfortable with. And more robust wage gains could eat into record-high corporate profits.

No matter the cause, the stock market was long overdue to take a breather. Before Friday, the S&P 500 had gone the longest stretch ever without a 3% pullback. Now the S&P 500’s record-long period without a 5% retreat is in jeopardy.

While they can be scary, market pullbacks prevent stocks from overheating and give investors who were stuck on the sideline a chance to get in. Janet Yellen, who just stepped down as Fed chief, told PBS on Friday that she still believes “asset valuations generally are elevated.”

Despite the recent turmoil, the Dow remains up almost 40% since President Trump’s election. The robust performance has been driven by strong corporate profits, healthy economic growth and excitement about the Republican tax cut for businesses.

“Take a deep breath,” the firm wrote in a research note on Friday. “For those investors that may have forgotten, this is what a market decline feels like.”

The question is whether the market retreat deepens or whether investors buy at the dip, a mentality that has supported stocks for months.

“The fundamentals of the economy remain quite strong,” said Janney’s Luchini. “It’s hard to make the case for why we should be down more than 10% — unless we encounter negative economic news.”

Wells Fargo suffered some of the worst of the selling on Monday. The No. 2 U.S. bank plunged 9% after unprecedented sanctions were handed down by the Fed late Friday.