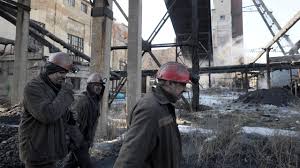 In his first State of the Union address late Tuesday, President Donald Trump touted the country’s job growth in his first year, the strengthening economy, and—a key part of his campaign—the surprising pop in the coal industry in 2017.

Certainly, he has reason to be happy about the numbers. Coal mining jobs have risen in the past year, an anomaly after years of decline. And it’s not the first time Trump has celebrated the apparent return of coal. Early in his presidency, he exaggerated that the country had “picked up 45,000 mining jobs in a very short period of time,” adding that he planned to do away with onerous regulation surrounding the industry.

But Trump is celebrating far too soon. In reality, the industry added a much lesser 8,000 jobs in 2017, up about 1.6% from a year earlier, based on preliminary Bureau of Labor Statistics figures in December. The industry has 50,500 positions in total. And the bounce in coal has little to do with the Trump administration itself—but rather market factors unlikely to have a repeat performance this year.

“We take stock of coal market developments in 2017 and find that while U.S. production did recover slightly, it had nothing to do with a change in federal policy,” Rhodium Group analysts wrote in a recent note.

James Stevenson, an analyst at IHS Markit, says the boost is largely due to 2017’s unseasonably cold weather and rising demand for coal from other nations. Cold weather drove up the price of natural gas—making coal look like a more attractive fuel option. Meanwhile, a synchronized economic recovery in 2017 led several countries to ramp up building projects—contributing to an increase in coal demand. The U.S.’ exports helped boost coal production in 2017 by 6% to 773 million short tons—though demand in the U.S. declined, according to data from the U.S. Energy Information Administration.

Part of Trump’s plan to reinvigorate the coal industry also seems to include putting pressure on the growing solar industry. Trump recently placed a 30% tariff on imported solar panels, a move that could make the product more expensive for consumers.

But his action is misguided, says Hans Daniels, CEO of Doyle Trading Consultants. It’s not solar or wind power that is cutting into the coal industry—but the explosion in natural gas as a result of fracking. By his estimates, renewables make up perhaps 7% of the power grid, with natural gas and coal making up the remaining majority.

“I can’t overstate the extreme competition between coal and natural gas,” Daniels said. Notably, while Trump has been outwardly friendly to the coal industry, he’s also taken a similar stance with the natural gas industry. Trump has pushed to export the country’s bounty of natural gas.

That dynamic is perhaps clearest with Energy Secretary Rick Perry calling for subsidies to keep coal and nuclear plants open late last year. That proposal was shot down by the Federal Energy Regulatory Commission, with just about the entire oil and gas industry strongly criticizing the plan. It highlighted the difficulties the Trump administration will run into should it favor one side over the other.

If the industry is to add a significant number of jobs, say the 45,000 that Trump appears to think it has added, coal mines would have to continue opening. But it will be hard for companies to make that commitment. Mines are built to last about 20 years—a very long-term commitment considering a president’s term lasts four years, Daniels said.

Tthere is little that can slow or reverse the coal industry’s decline as consumers seek cheaper energy options such as natural gas.

“There isn’t much you can do to overshadow the natural gas prices,” said Peter Marstars, research analyst of the Rhodium Group.

Government estimates seem to concur. The Energy Information Administration said earlier this month that it expects U.S. coal production to fall 2% to 749 million short tons in 2018, and fall another 2% in 2019.

One silver lining: recent data shows that Americans who live in coal country, like the Appalachian region, aren’t resting on their laurels.

“Based on evidence gathered from focus groups and interviews conducted in U.S. coal communities, we argue that coal communities that have experienced mine closures have already begun an economic and social transition, one that is based on reshaping their culture and sense of identity,” wrote professors of Indiana University in a paper published in the March issue of Energy Research and Social Science.