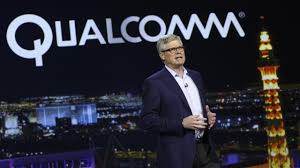 It seemed like quite the stunner: besieged mobile chipmaker Qualcomm promising this week that it could earn as much as $ 7.50 per share next year, almost twice what Wall Street expects. But dig into the numbers and the assumptions and the promises, and there may be less there than meets the eye.

Qualcomm CEO Steve Mollenkopf is already dancing as fast as he can. He has to revive the company’s core mobile business that has seen revenue shrink for three consecutive years. He’s also fighting off an unwanted $ 105 billion takeover from Broadcom and its hard charging CEO Hock Tan. Oh, and Mollenkopf still needs to close on Qualcomm’s own $ 47 billion acquisition of NXP Semiconductors, and all the while engaging in a fierce legal battle with Apple, once the company’s best customer.

So there was Mollenkopf, looking sharp in a navy suit and blue tie, perched on a high stool alongside his top lieutenants on Tuesday, appearing in a surprise, half hour video presentation to investors. The CEO promised Qualcomm would bring in $ 6.75 to $ 7.50 per share in adjusted profit in 2019 (versus the current average analyst forecast of just $ 3.77 according to FactSet), largely due to the coming adoption of the next generation of wireless technology known as 5G, he said.

“Qualcomm today is at an important inflection point. Think about a world in which everything is connected…This is the world of 5G, which will impact almost every facet of people’s lives,” Mollenkopf explained. “Only a small handful of companies invest in the R&D that enables each generation of mobile technology. As we did with 3G and 4G, Qualcomm has been leading the development of 5G.”

The aggressive stance perked up investors. Qualcomm (qcom) with its shares gaining almost 5% in mid-day trading on Wednesday. But at $ 68.57, the stock remains slightly below Broadcom’s current $ 70 offer price. It’s hard to tease out just what the price level means-some investors could be discounting the takeover bid because it would take a long time to get antitrust approvals, while other may believe Qualcomm will successfully fend off the suitors and bring in the larger profits it is promising.

Broadcom’s (avgo) stock price has risen about 1% since the presentation.

And the unwanted suitor also issued its own response to the presentation by saying that Qualcomm management had “repeatedly overpromised and under-delivered” on past financial forecasts. “Qualcomm’s approach is a transparent attempt to sell a quick fix by the Qualcomm Board of Directors and management team and an obvious tactic to deny its own stockholders the opportunity to receive a compelling premium for their shares and significant upside potential in the combined company,” the company said in a statement.

When analysts dug into Qualcomm’s 2019 profit promise, however, they discovered that it relied on several key assumptions that had nothing to do with 5G.

First, about $ 1.50 per share relied on completing the acquisition of NXP, which sells chips to automakers and makers of connected gadgets in the Internet of Things market. Though European regulators where NXP is based are reportedly on the verge of approving the transaction, some NXP (nxpi) stockholders have complained that Qualcomm’s $ 110 per share offer is too low and may have to be raised. If the deal doesn’t go through, Qualcomm said it could boost earnings per share via a massive stock buyback instead.

Analysts typically don’t include the profit contribution from a company being acquired until the deal is closed, so that component of Mollenkopf’s profit promise wasn’t really much of an upside surprise.

Another almost 60 cents would come from a new $ 1 billion cost-cutting program Mollenkopf unveiled on Tuesday without giving many details.

And, most uncertain of all, a final $ 1.50 to $ 2.25 would come from settling outstanding legal disputes with Apple (aapl) and another unidentified phonemaker. There has been no evidence that Apple is much interested in coming to the table without huge concessions from Qualcomm that may undermine its entire business of collecting royalties from licensing its technology to phonemakers, however.

Deduct those three less-than-definite components, and Qualcomm’s promise is equal to only about $ 3.18 per share in 2019, analyst Stacy Rasgon of Bernstein Research calculated—considerably less than Wall Street currently expects. That’s because Qualcomm may have to pay higher taxes under the new corporate tax rules adopted last year that limit the use of some kinds of international tax avoidance strategies. And Apple is likely to cut its purchases from Qualcomm further as it looks for alternative chip suppliers for the iPhone, Rasgon noted.

Even Qualcomm’s projected gains from 5G may be overly-optimistic, Tim Long, an analyst at BMO Capital wrote. “Management likely believes that the core mobile business will grow faster, but we are more cautious on 5G,” Long said in a report after the presentation. “Management expects (earnings per share) to grow at twice faster than revenues, though the company has struggled in the past growing EPS faster than sales.”

Qualcomm’s recent history doesn’t give investors much confidence, either, the analysts said. With the burgeoning legal battles over royalties paid by phonemakers and a slowing of sales growth of mobile phones, Qualcomm’s revenue has dropped from $ 26.5 billion and adjusted earnings per share of $ 5.27 at its peak in 2014 to $ 23.2 billion and $ 4.28 per share last year. Wall Street expects revenue to bottom out at $ 22.8 billion this year and then rebound to $ 23.4 billion next year, according to FactSet (not including the NXP deal, which would add another $ 9 billion or more of annual revenue). Adjusted earnings are forecast to hit a low of $ 3.48 this year and then rise to $ 3.77 in 2019.

But the fight with Broadcom, which has nominated its own slate of candidates for Qualcomm’s upcoming board election, seems to have lit a fire under underperforming Qualcomm, Nomura Instinet analyst Romit Shah noted.

“Qualcomm leadership is very smart, but over the last several years, the San Diego-based management team at times has been unassertive and complacent,” Shah wrote in a report on Tuesday. “Though now with Broadcom’s hostile takeover attempt analogous to a ‘gun to the head,’ we expect the company to more aggressively focus on driving shareholder value in order to remain a standalone franchise.”