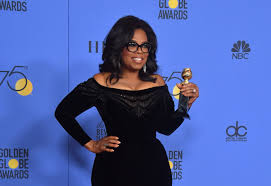 Oprah Winfrey won over the Golden Globes, and that was good news for Weight Watchers International Inc. investors.

Winfrey, who owns 10 percent of the weight-loss company and is featured in its ads, dominated coverage of the Hollywood awards show Sunday night. After receiving the Cecil B. DeMille award for lifetime achievement, she delivered a well-received speech that rekindled rumors she’ll run for president in 2020.

While the 63-year-old media mogul told Bloomberg News backstage that she has no plans to run, an anonymous report from CNN that she is “actively thinking” about a bid fanned the flames on Monday. That helped drive Weight Watchers share up as much as 13 percent to $ 52.96 in New York, the biggest intraday gain in two months.

Weight Watchers, which was hammered by free fitness apps and years of subscriber losses, has mounted a comeback since Winfrey bought a stake, joined the board and agreed to pitch the brand in 2015. Since then, her tweets about weight loss on the program have buoyed the shares, which almost quadrupled last year.

The billionaire’s marketing halo has also helped the company add customers and increase revenue and profit in recent quarters.