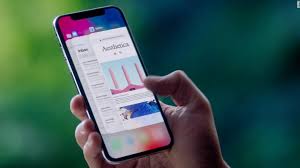 Is the iPhone X a disappointment? Investors think so

The “x”citement might be over for the iPhone X.

Shares of Apple and its suppliers tumbled this week after multiple industry analysts predicted weak demand for the new flagship iPhone. Apple’s (AAPL) stock slid by as much as 4% in premarket trading Tuesday.

The radically redesigned iPhone X was supposed to give Apple a boost following several years of sinking sales. Early sales reports were positive, and Morgan Stanley reported last week that the iPhone X is especially hot in China.

But the first wave of demand among Apple fanatics seems to have passed, and analysts are skeptical that more casual iPhone customers will upgrade to the iPhone X.

The analyst reports come after Taiwanese newspaper Economic Daily reported Monday that Apple had dramatically lowered its own iPhone sales expectations from 50 million to 30 million.

Investors punished companies that make iPhone components. Shares Genius Electronic Optical, which makes of iPhone lens modules, have fallen by more than 11% this week. Pegatron and Lumentum fell by 3%. Finisar and Skyworks fell by 2%. Foxconn fell by 1%.

The good news for Apple is that the 2017 holiday shopping season was likely its best ever. Analysts predict Apple sold as many as 90 million iPhones over the past three months, which would blow away the company’s previous record.

CEO Tim Cook said in November that orders for the iPhone X have been “very strong” and defended the $ 999 price tag for the redesigned phone. The company hasn’t publicly released iPhone X sales figures.

Apple’s stock is up 50% for the year and continues to inch closer to becoming the first public company worth $ 1 trillion.