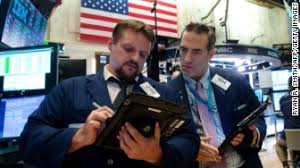 Party leaders agreed on the final text of their tax bill last week and made it public on Friday. The House is expected to vote on Tuesday, and the Senate will follow soon after.
The bill, which is expected to pass on party lines, could be on President Trump’s desk before Christmas.

The measure drops the corporate tax rate to 21% from 35%, repeals the corporate alternative minimum tax and restructures the way pass-through businesses are taxed.

Stocks have rallied this year because of strong economic growth and hopes that Trump would roll back regulations and overhaul the tax code.

3. Bombardier tariff ruling: The U.S. Department of Commerce is set to rule on tariffs that could be placed on Bombardier’s C-series passenger jet.

Bombardier denies that it has engaged in unfair trade practices.

5. Companies and economics: Carnival (CCL) and Darden Restaurants (DRI) will release earnings before the U.S. open, and FedEx (FDX) will follow after the close.

Pfizer(PFE) shares were higher premarket after the company announced a $ 10 billion stock buyback on Monday.

Shareholders in the London Stock Exchange will vote on the future of embattled chairman Donald Brydon. The hedge fund TCI Fund Management, which owns just over 5% of the LSE, has sought to oust Brydon.

The U.S. Census Bureau will publish its housing report for November at 8:30 a.m. ET.

Germany’s Ifo Institute has released its latest business climate survey. It said the mood among German business leaders is “excellent, but not quite as euphoric as last month.”