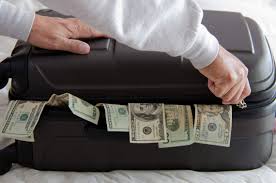 The Crazy Way the U.S. Tax System Saps the Economy

One of the goals of the Tax Cuts and Jobs Act, the GOP tax plan unveiled earlier this week, is to close the gap between corporate tax rates in the U.S. and those abroad. A recent study, published as a working paper by Harvard Business School, shows just how much that gap could be costing the U.S. economy—and why tax reform advocates are so eager to eliminate it.

Could it be that America’s multinationals resemble rich folk who steer big portions of their income into low-yielding tax shelters, just to hold down their payments to the Treasury and state governments? In other words, are big companies pouring their earnings into mediocre investments simply to avoid or delay paying taxes? If that’s the case, the U.S. corporate tax system is preventing the free flow of capital to the place it earns the best returns, and in the process, stifling economic growth.

That’s precisely what’s happening, according to the study co-authored by Urooj Khan, a professor at Columbia Business School. “Corporate profits right now are great,” notes Khan, “But they’re not translating into economic growth in the U.S. And that’s because of the way the U.S. taxes foreign earnings.”

The problem, says Khan, is that the U.S. system encourages multinationals to hold profits earned abroad in overseas subsidiaries, where they’re either stockpiled in cash, plowed into new factories and labs, or deployed to buy foreign companies. In most cases, he says, those investments generate far lower returns than those available right here at home—but they’re better for overall earnings simply because bringing them home would generate a gigantic tax bill.

It’s a combination of super-high rates, and the ease of avoiding them by exploiting the generous tax shelters on foreign profits, that explains why multinationals leave most of those earnings abroad—even though they typically generate subpar returns. The U.S regime imposes our statutory 35% tax rate on earnings booked anywhere around the globe; multinationals are obligated to send the Treasury the difference between our 35% and what they’ve already paid in the nation where they produce the products. And that difference is often big. If a pharma or tech giant repatriates profits from Ireland, where the top rate is 12.5%, it would face an additional tax of 22.5%. That’s so stiff that U.S. companies pass up rich opportunities stateside just to avoid the hit.

Instead, they exploit the biggest loophole in the U.S. corporate tax system. Under the GAAP accounting rules, if a multinational reinvests foreign earnings abroad “permanently” to expand its foreign operations, or even plans to invest funds now sitting in cash at a later date, it doesn’t have to count that foreign income as profit. Apple, a model citizen with regard to taxes, would have paid the Treasury more than $ 5 billion in additional taxes in its fiscal 2016 were it not for this provision.

According to Khan, those rules punish the U.S. economy. In the paper, The Role of Taxes in the Disconnect between Corporate Performance and Economic Growth, Khan and his co-authors studied the relationship between GDP and profit growth from 1975 to 2013. Their assumption was that all other things being equal, corporate profits and GDP should grow in tandem as companies reinvest earnings to grow their businesses in what’s been over many decades the world’s most dynamic economy. But that hasn’t been the case, and the treatment of foreign earnings is at fault.

The study found that for those 38 years, U.S. corporate profits expanded on average 0.75% faster each quarter than GDP. During that span, the U.S. corporate tax rate was always higher than the average for other OECD nations, but the gap varied considerably over time. In the years when the difference was smaller than the 38-year average, the growth of corporate profit exceeded that of GDP by 0.5%. When the gap was greater than average, earnings waxed at 1% faster than national income, double the difference when U.S. rates were more competitive.

The new Tax Cuts and Jobs Act, which would cut the U.S. corporate tax rate from 35% to 20%, would go a long way towards fixing this broken system. “The 20% rate is extremely competitive because the OECD average is around 25%,” says Khan. The measure would also eliminate the sheltering of foreign income, he says, by requiring that companies pay only the local tax in the nation where they produce the product, plus an additional levy only if they generate lots of earnings in tax shelter jurisdictions. In other words, multinationals could no longer avoid U.S. taxes by investing earnings abroad. The most underrated advantage of comprehensive tax reform is its potential impact on economic growth, which it would boost by eliminating the “the rich man syndrome” of accepting low returns to avoid taxes.

Corporate profits are performing brilliantly, and foreign nations are reaping a lot of the benefits. The new tax plan would steer loads of those profits where multinationals want them to go, right here in the U.S.A.