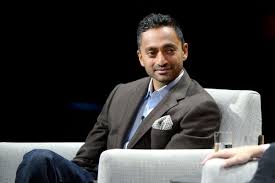 Social Capital Will Let Data Decide Where It Invests

On Monday, we talked about how SoftBank’s Masayoshi Son is capitalizing on the “information revolution” with his monster investment fund.“Those who rule data will rule the entire world,” he said. On Tuesday, MasterCard’s CEO Ajay Banga said at a conference in Saudi Arabia that “data is the new oil.” The theme continues nicely for the third day in a row after Social Capital’s launch of its new data-focused investment platform.

On Wednesday, the firm announced an operating system for early-stage investing called “capital-as-a-service.” Put simply, Social Capital will invest in startups without having to go through the process of a traditional pitch. (Which means fewer humans have to listen to pitches that start with: “Imagine a jacket, but for your legs.” Really.)

“No hoops, no $ 7 artisanal coffee chats, no designer pitch decks, no bias, no politics, no bullshit,” Ashley Carroll, the partner in charge of overseeing the project, explains in a Medium post.

Here’s how the self-serve platform works: Entrepreneurs fill out a questionnaire, submit relevant figures such as revenue and raw engagement data, and/or grant the firm access to its cloud services. Social Capital will then evaluate the company and write a check or pass and deliver feedback.

It’s no surprise that the firm is taking this route. For years, Palihapitiya’s vision has been pretty clear — operational experience coupled with a focus on data. But as Social Capital begins to expand and veer toward being stage-agnostic, some people aren’t on board with the direction the firm is taking. Social Capital co-founder Mamoon Hamid abruptly departed in August to join Kleiner Perkins Caufield & Byers. The company’s third co-founder Ted Maidenberg won’t be making new investments or participating in any future funds, although he’s currently still supporting the portfolio.

In spite of the high-profile turnover, Palihapitiya seems to be hyper-focused on this data-driven approach, and he reiterated his plan to make Social Capital a full-service capital partner to the businesses it invests in throughout their lifecycles. He added:

“CaaS is designed for entrepreneurs who are either over-served or under-served by today’s venture status quo. In that first bucket: founders who prefer a low-touch, highly efficient funding process, or don’t want to give up a large chunk of ownership in their company. In the latter: founders outside Silicon Valley and the US more generally who often don’t have access to Silicon Valley-based firms, nor the networks necessary to get the right warm intro.”