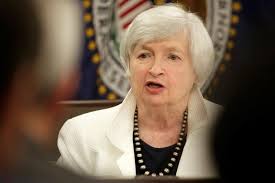 “We will be paying close attention to the inflation data in the months ahead,” Yellen said in prepared remarks at an international banking seminar in Washington. “My best guess is that these soft readings will not persist.”

Yellen also said she expected the U.S. economy to exceed its long-term trend during the second half of the year and repeated the impact of recent hurricanes on the economy should be temporary.

The U.S. central bank voted to hold interest rates steady at its last policy meeting in September. Since then, Yellen has repeatedly acknowledged rising uncertainty on the path of inflation, which has been retreating from the Fed’s 2 percent target rate for much of the year.

Minutes from the meeting, released last Wednesday, showed policymakers had a broad debate about recent soft inflation and the impact on interest rates if it fails to rebound.

However, Yellen and some other key policymakers have also made plain they expect to continue to gradually raise interest rates given the strength of the overall economy and continued tightening of the labor market.

Fed officials largely shrugged off a weak jobs report for September and pinned the decline in employment on Hurricanes Harvey and Irma temporarily displacing workers.

In her speech, Yellen said the most recent wage gains contained in the September jobs report were encouraging and that she expected the central bank to raise interest rates further.

“We continue to expect that the ongoing strength of the recovery will warrant gradual increases in that rate to sustain a healthy labor market and stabilize inflation around our 2 percent longer-run objective.”

The central bank has raised interest rates four times in its tightening cycle which began in late 2015. The Fed currently predicts one more rate rise this year and three the next.

The Fed has two more scheduled meetings this year, in November and December. Investors currently see the Fed raising interest rates in December.