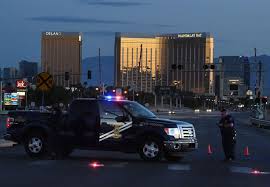 After police say 64-year-old Stephen Paddock killed at least 58 people and wounded more than 500 in the mass shooting at the Route 91 Harvest Festival at the Mandalay Bay in Las Vegas, the casino giant behind the hotel shed about $ 909 million from its market capitalization on Monday.

Shares of MGM Resorts International (mgm) fell nearly 5% in trading Monday, with the casino company’s market capitalization dropping to $ 17.8 billion after police said Paddock had opened fire at concertgoers from the 32nd floor of the nearby Mandalay Bay Resort and Casino. It led the sell-off of casino management companies with heavy presences on the Las Vegas Strip, with shares of Wynn Resorts (wynn), Red Rock Resorts, Caesars Entertainment (czr), and Boyd Gaming (byd) all falling following the news. In total, the five casino and hotel companies shed a total of $ 1.8 billion from their market capitalizations by midday Monday as the Las Vegas shooting fanned worries about tourists returning to the strip following the tragedy.

“Our thoughts & prayers are the victims of last night’s tragic events. We’re grateful for the immediate actions of our first responders,” MGM Resorts said in a statement Monday.

For MGM, Las Vegas resorts accounted for roughly 57% of its total operating income in 2016, or about $ 1.2 billion.

Still, MGM’s losses were relatively contained. After all, its stock hasn’t jumped 19% over the past year solely due to its performance in Las Vegas. While Las Vegas has accounted for the bulk of MGM’s revenues, MGM has been diversifying since its near-bankruptcy experience following the financial crisis. Now, investors are largely looking toward the casino management firm’s expansion on the U.S. East coast and Asia for future growth.