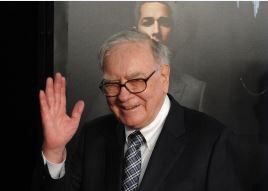 The 4 Buffett Stocks You Need To Retire On Easy Street

Companies like Synchrony profit from the spread between the interest rates it charges and the rate it pays on bank deposits and other capital. Currently, bank deposits represent over 68% of the SYF’s capital source. The difference between the low-interest rates paid on the deposits compared to the extremely high relative rates charged by SYF creates fat profits.Solid performance has resulted in substantial revenue growth since SYF was formed in 2013. So far in 2017, revenue has grown by 12% to nearly $ 8 billion. It’s amazing how much can be made from an interest rate spread!

It’s reasonable to think that these trends will continue, as interest rates have increased by 11% in the first six months of 2017. Surprisingly, the stock is trading down nearly 20% this year, meaning you can grab the shares at a great price.

2. Bank of New York Mellon (NYSE: BK)
This old-time bank and money management company has captured Buffett’s interest. He recently ramped up his holdings in the company by over 50%, and his stake now accounts for 1.8% of Berkshire’s portfolio.

BK has outperformed its peers over the last 90 days thanks to increasing loan demand and cost-saving initiatives. Also, President Trump’s progress in repealing the Dodd-Frank Act has helped lift the banking sector as a whole.

What has me the most bullish long-term on this Buffett stock is its expansion into foreign markets. Last year, over 34% of BK’s total revenue came from overseas. The percentage should continue to increase as global markets expand and increase their financial sophistication. Many international markets possess tremendous growth potential which will support the bank’s profits regardless of what happens domestically.

Shares are higher by around 10% this year and the stock yields just under 2%.

3. Apple (Nasdaq: AAPL)
While many analysts are questioning the wisdom of owning Apple right now, Buffett’s commitment to the company is unwavering. The stock is his third-largest holding, taking up nearly 12% of his portfolio. Boasting an incredible $ 800 billion-plus market cap, the behemoth remains an appealing candidate for a Buffett-inspired retirement stock.

The bullish case for Apple has several key points. First, the company is aggressively improving its products. Second, Apple has allotted $ 1 billion for original entertainment content creation, a proven moneymaking sector. Finally, it is quickly moving into future technologies like autonomous automobiles, augmented reality and virtual reality, and a variety of services. These three bullish facets will feed growth long into the future.

I also love that the company is moving into emerging markets like India. India is pushing for greater foreign investment and is actively seeking to ramp up its manufacturing infrastructure. Government support, combined with India’s relatively young population, creates the perfect storm for Apple to thrive in the nation. In fiscal 2016, Apple’s Indian sales exploded by 50% over fiscal 2015. I fully expect this growth to continue into the future.

Apple’s success continues, despite the naysayers. In the third quarter 2017, Apple posted revenues of over $ 45 billion, with 17% earnings growth and a just over 7% revenue increase year-over-year.

4. General Motors (NYSE: GM)
Buffett recently ramped up holdings of this leading American auto company by 20%, and it now makes up nearly 1.3% of Berkshire’s portfolio.

The $ 57 billion-market cap giant’s shares are higher by nearly 23% over the last 52 weeks. Strong fundamental performance backs up the solid stock performance. The company is on track to reach its 2017 goal of making its brands stronger, ramping up retail sales, and increasing product offerings of its four brands. Also, GM has forecasted 2017 earnings to surpass 2016’s $ 6.12 per share.

A very bullish factor is the auto company’s plan to return its substantial available free cash flow to shareholders while holding onto an investment grade balance sheet and nearly $ 17 billion in cash to spur growth. The initial repurchase plan of $ 5 billion was wrapped up in the third quarter of 2016. This year the plan is to return up to $ 7 billion in share buybacks and dividends.

Just like Apple, GM is rapidly increasing capacity investments in emerging markets. The company has projected more than 50% of global sales growth will arise from emerging markets by 2030. GM has plans to launch 18 new and refreshed vehicles in 2017, and 60 in total by 2020.

The innovation and future growth strategy of GM make it the ideal stock for a long-term retirement portfolio.

Risks To Consider: Past results are not guarantees of future performance. Just because Buffett is heavily invested in a stock does not guarantee it will continue to outperform. Despite his massive success, Buffett has suffered his share of losing stock picks. Always use stops and position size properly when investing.

Action To Take: Consider adding one or more of the above Buffett stocks to your retirement portfolio.

Editor’s Note: Want more money when you stop working? Call your broker and tell him eight simple words. It could mean an extra $ 86,447 in your account. Do it in a specific way and it can also triple your retirement income. It’s all right here…