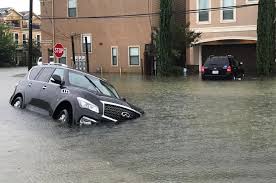 Three Companies That Will Benefit From Hurricane Recovery

As a lifelong resident of a hurricane-prone area, and having sat through more than a handful of them, I feel a little guilty promoting what some people refer to as “disaster capitalism”. At the same time, one of the greatest investors of all time, Baron Rothschild, proffered that one should “buy when you hear the cannon, sell when you hear violins.” I’ve referenced that quote multiple times in my writing and will continue to do so because it’s some of the best investing advice ever.

After unloading an estimated 33 trillion gallons of water on the United States, mostly on coastal Texas, Hurricane Harvey could be responsible for damage exceeding $ 180 billion. In the Houston area alone, it’s estimated that nearly 40,000 homes have been completely destroyed.

Even more remarkable was the projected number of cars completely ruined by the floodwaters. Again, in just the Houston area, which is heavily auto-dependent, the total could be over 1 million vehicles. The number is much higher if the entire affected area is included.

According to auto researcher Kelley Blue Book, the average transaction price for a new car in the United States is currently $ 33,560. That means that replacing the lost cars in Houston alone could be worth over $ 33 billion. Granted, not every purchase will be a new car, but we’re still talking about a significant jump in sales here. With that in mind, here are three stocks that will benefit from this situation.

​Ford Motor Company (NYSE: F)
After its most recent C-suite shakeup, shares of Ford have risen nearly 9%. New management and a refocus on Ford as an automotive technology company rather than just a car company have contributed to the gain. The company is also furiously expanding electric vehicle development through global joint ventures, especially in China. In the wake of the Texas and Florida hurricanes, the brand has stepped up its commitment to helping victims with “Florida is Family” and “Texas is Family” special pricing and payment terms on new vehicles. Despite the recent price move, the stock is still attractively priced at $ 11.60 with a ridiculously low forward P/E of 6.6 and a compelling 5.1% dividend yield.AutoNation (NYSE: AN)
While Harvey directly affected the company’s 18 stores in the Houston area, all are back up and running and already working with customers to replace vehicles claimed by the flood. According to longtime CEO Mike Jackson, the results of those sales, from both new and used cars, should flow through to the company’s bottom line in the fourth quarter. Shares of the nation’s largest automotive retailer are priced at $ 46.10, a14% discount to their 52-week high, with a value-level forward P/E of 12.87.

CarMax (NYSE: KMX)
As AutoNation is to new cars, CarMax is to used cars. The nation’s largest pre-owned automotive retailer, with 178 stores nationwide (the used car business is still extremely fragmented), CarMax still has room to grow and consolidate. While the first two stocks discussed have yet to benefit from the hurricane recovery, CarMax’s shares have already enjoyed a noticeable bounce. However, the company is on a solid growth track averaging annual earnings per share (EPS) growth of 13%. Despite the move, investors would hold a genuine growth business. Shares currently trade around $ 68.80 with a forward P/E of 18.67 — not bad for a growth stock. The company can also rely on its financing arm, which comprises half of its annual revenue, for continued growth.

Risks To Consider: From a macro point of view, the primary risk facing this idea is speed. Hurricane victims must settle with insurance companies, which typically take their sweet time. Hundreds of thousands, perhaps millions, of claims must be processed. This thesis may take some time to play out.

Luckily, despite AutoNation’s direct exposure to the stricken area, for the most part, these three stocks provide an ample amount of geographic diversification. On a different note, the fact that neither CarMax nor AutoNation pay a dividend irks me somewhat. However, both companies are growing EPS at an average 5-year rate of 15%, which is a decent tradeoff.

Action To Take: As a basket, these three stocks trade at an average forward P/E of 12.71 with an effective dividend yield (Ford is the only dividend payer) of 1.72%. Based on all three companies’ ability to successfully benefit from recovery and continue their respective growth paths, a modest expansion of the forward P/E to 15 would result in total returns of 25% or better.

Editor’s Note: A few months ago, a group of millionaires and billionaires gathered in a private conference room 26 miles from Mar-a-Lago to discuss their “Trump Era” investments. And believe it or not, a common theme was to invest in American businesses. 7 companies in particular stood out… Full story here.