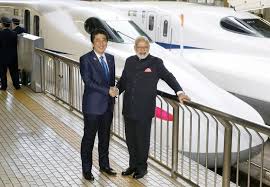 The move by Abe, who starts a two-day visit to India on Wednesday, highlights an early lead for Japan in a sector where the Chinese have also been trying to secure a foothold, but without much success.

Modi has made the 500-km- (311-mile-) long high-speed rail link between the financial hub of Mumbai and the industrial city of Ahmedabad in Gujarat a centrepiece of his efforts to showcase India’s ability to build cutting-edge infrastructure.

The leaders will launch the start of work on the line on Thursday, India’s railways ministry said in a statement.

In Tokyo, a Japanese foreign ministry official told reporters, “We would like to support ‘Make in India’ as much as possible,” referring to Modi’s signature policy to lure investors in manufacturing.

“And for that, we want to do what’s beyond the Mumbai-Ahmedabad line and achieve economies of scale.”

India would make “all-out efforts” to complete the line by August 2022, more than a year earlier than planned, the government said this week.

Japan is providing 81 percent of the funding for the 1.08-trillion-rupee ($ 16.9-billion) project, through a 50-year loan at 0.1 percent annual interest.
TIES BLOSSOMED

Ties between India and Japan have blossomed as Modi and Abe increasingly see eye-to-eye in countering growing Chinese assertiveness across Asia.

Japanese investment into India has surged in areas ranging from automotives to infrastructure in the remote northeast, making Tokyo its third-largest foreign direct investor.

India and Japan are also trying to move forward on a plan for New Delhi to buy Japanese amphibious aircraft – ShinMaywa Industries’ US-2 – in what would be one of Tokyo’s first arms transfers since ending a self-imposed embargo.

Tokyo hopes that by gaining a head start on rival exporters of rail technology such as China and Germany, its companies will be able to dominate business in one of the most promising markets for high-speed rail equipment.

In 2015, China won a contract to assess the feasibility of a high-speed link between Delhi and Mumbai, part of a network of more than 10,000 km (6,214 miles) of track India wants to set up, but little progress has been made.

But a $ 15-billion safety overhaul has hit delays as a state steel firm proved unable to fill demand for new rail.