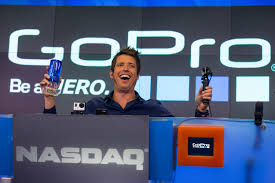 Action camera maker GoPro (gpro) said on Thursday it expects to be profitable on an adjusted basis in the third quarter, ahead of the holiday season launch of its newest cameras, sending its shares up 17%.

The company’s body-mounted point-of-view cameras have a huge following among action junkies such as surfers and skydivers, but sales have taken a beating in recent quarters after a series of missteps including production issues and delays.

GoPro, which had earlier expected to report an adjusted loss in the third quarter, said strong demand for its cameras and drones was helping it reduce inventory.

The company also said it was on track to launch the Hero 6, the latest edition of its flagship action cameras, and the new Fusion 360 camera by the holiday season.

“(GoPro’s) execution is going well … specifically, the excitement is that the demand for existing GoPro products is strong and that bodes well for quite a Hero 6 sell run,” Wedbush Securities analyst Alicia Reese said.

GoPro’s shares have fallen nearly 50% since October over concerns it is losing ground to feature-rich smartphones and rival products from companies such as Garmin and Sony Corp.

Production issues with the Hero 5 camera and a delay in the launch of its Karma drone had also dented sales, weighing on the company’s stock.

A successful launch of the Hero 6 could help allay some of those concerns.

The company said it expects third-quarter revenue and gross margins to be at the high end of its forecast of $ 290 million to $ 310 million and 36% to 38%, respectively.

On an adjusted basis, the company had earlier expected a loss of 1 cent to 11 cents per share.

Analysts on average were expecting a loss of 5 cents per share and revenue of $ 304 million, according to Thomson Reuters I/B/E/S.

GoPro Chief Executive Nick Woodman said last month the company expects low double-digit revenue growth for 2017 and to be profitable for the year.