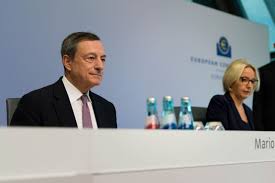 Things have turned quite bleak for the dollar in the last couple of months: the hopes of a new age of strong U.S. growth and briskly rising interest rates have faded, a nuclear crisis with North Korea has emerged and the short-term outlook is set to be depressed by devastation from at least one hurricane.

Fortunately for the greenback, it can always rely on its friends in the world’s central banks, with the European Central Bank’s Mario Draghi front and center. Draghi did his level best to stop the euro rising any further against the dollar Thursday after a 13% rally in the last four months. He and his colleagues are afraid that if the single currency continues to rise at its current rate, then the Eurozone’s export motor will stutter and the bloc will lose its best chance in years for a self-sustaining economic recovery: its GDP grew 2.3% year-on-year in the second quarter, its best rate in 10 years, and the ECB revised up its growth forecast for this year to 2.2% from 1.9% three months ago.

“The recent volatility in the exchange rate represents a source of uncertainty which requires monitoring with regard to its possible implications,” Draghi told his regular press conference after the ECB left its official interest rates unchanged Thursday, as expected. (Read Draghi’s prepared statement in full here.)

That degree of concern was enough to keep the foreign exchange market from an all-out assault on the dollar, limiting the euro’s gains to less than half a cent. By mid-afternoon in Europe, it had only edged up to $ 1.2008.

The relatively muted reaction was also down to the ECB punting a decision on how quickly to wind down its ‘quantitative easing’ program. Draghi said the bank should be ready to take the bulk of decisions about ending its bond purchases when it next meets in October, although he also hinted that such decisions could be pushed back to December if there is any more unwanted volatility.

That should help keep the politically-shy central bank out of the headlines while Germany prepares for federal elections in two weeks’ time. The ECB’s policy of keeping euro interest rates as low as possible is unpopular in the bloc’s biggest economy, and Finance Minister Wolfgang Schaeuble and Deutsche Bank CEO John Cryan both urged the bank Wednesday to return to a more ‘normal’ monetary policy as soon as possible. Isabel Schnabel, a member of the German government’s council of economic experts, said via Twitter that Draghi had missed a chance to communicate an exit policy and in doing so had raised the risk of more harmful volatility further down the line.