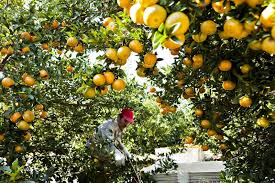 Orange prices are spiking as traders fear Hurricane Irma could devastate one of Florida’s best-known agricultural exports. Irma, already the strongest Atlantic hurricane on record, made landfall in the Caribbean Wednesday and could strike Florida later this week.

Orange concentrate futures for November delivery rose Wednesday to their highest point in four months, or about $ 1.47 per pound. Those prices “tend to go up ahead of hurricanes in fear of a direct hit hitting the crop and causing problems,” Shawn Hackett, CEO of Hackett Financial Advisors, told Fortune.

Florida is the world’s second-largest orange producer, behind only the country of Brazil.

Floridians are bracing for the worst ahead of Irma’s possible impact. Still, forecasters say it’s too early to tell exactly where the storm might hit. There’s a chance Irma could also affect Georgia and South Carolina, in which case cotton prices could rise as well, says Hackett.

U.S. orange production has already slowed over the past decade due to crop damage and diseases. The U.S. Department of Agriculture previously estimated that U.S. production would drop to 4.6 million tons between November 2016 and October 2017 from 5.6 million tons a year earlier. Meanwhile, consumer demand has been sliding as shoppers begin to view store-bought orange juice as potentially unhealthy.