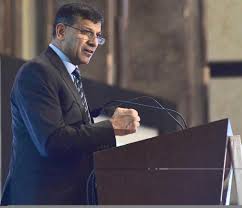 The most important function for a central bank is to stabilise the exchange rate, and that involves containing inflation to protect the currency’s value, former Reserve Bank of India Governor Raghuram Rajan said on Tuesday.

“I think for the central bank stabilising the value of the rupee and holding it are most important tasks,” said Rajan at an event in Chennai marking the launch of his new book “I Do What I Do.”

“The central point of a central bank is preserving the value of the currency, which means keeping inflation under control.”

Rajan took the helm of the RBI in September 2013 when the rupee was mired in its worst crisis in more than two decades. He immediately took several steps to stabilise the currency, and raised interest rates early in his tenure to bring down inflation.