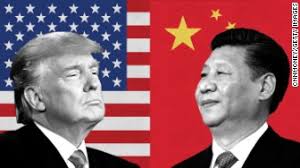 After Kim Jong Un’s regime carried out its biggest nuclear test so far on Sunday, Trump fired off a series of tweets, including a warning that he’s considering “stopping all trade with any country doing business with North Korea.”
The extraordinary remark was clearly aimed at China, which accounts for roughly 90% of North Korea’s international trade.

Experts were quick to point out that halting commerce between America and China is virtually impossible.

“This isn’t even in the realm of the remotely plausible,” said Edward Alden, a senior fellow at the Council on Foreign Relations who specializes in trade. “Even assuming trade with these countries could be cut off it would cause enormous damage to the U.S. economy.”

By issuing a warning that his administration couldn’t enforce, Trump undermines the credibility of U.S. government statements on North Korea and other delicate issues, analysts say.

“First rule of diplomacy is never make a threat you can’t carry out,” tweeted Mark Fitzpatrick, executive director for the Americas at the International Institute for Strategic Studies.

Trade between the U.S. and China was worth nearly $ 650 billion in 2016. China is the U.S.’s largest trading partner in goods, supplying products such as iPhones and toys as well as machinery and parts vital for American industry. It also buys a lot of U.S. farm produce like soybeans and high value exports such as Boeing (BA) passenger jets.

The world’s top two economies also do a huge amount of trade with other countries, and that would be thrown into chaos by any attempt to stop shipments between the U.S. and China.

Related: What’s left to sanction in North Korea after its big nuclear test?

In response to Trump’s threat, China said Monday it was “unacceptable” and “not fair” to be sanctioned for trading with North Korea when it was working hard to “peacefully resolve” tensions in the Korean peninsula.

“When the president makes such obviously fantastical statements, the rest of the world is left scratching its head as to the genuine intentions of the administration,” said Alden. “The result is an increasingly dangerous uncertainty.”

Trump may believe that unpredictability can be used to pressure China and other countries to play ball on North Korea.

But at the same time, he is reportedly considering pulling out of a free trade agreement with South Korea, a move that would stoke tensions with a key U.S. ally. On Sunday, he accused the South Korean government of wanting to “appease” North Korea.

“This is no time to lecture South Korea or suspend free trade agreement. Best way to deter North Korea is to stand firmly with Seoul+Tokyo,” tweeted Nicholas Burns, a veteran diplomat who served as under secretary of state for political affairs under President George W. Bush.

Related: China can squeeze its neighbors when it wants. Ask South Korea

Trump’s bizarre threat to stop “all trade” with countries doing business with Pyongyang highlights his limited choice over how to respond to North Korea’s advancing nuclear program.

Economic pressure doesn’t appear to be having enough of an effect to make Kim change course.

Rather than cutting off trade with entire countries, as Trump suggested, experts say he may have more success by stepping up his administration’s efforts to punish Chinese companies and individuals that deal with Kim’s regime.

Treasury Secretary Steven Mnuchin suggested Sunday that more such measures are in the works.

To make a real difference, some analysts argue that the U.S. needs to hit Chinese banks with significant fines for moving North Korean funds through the American financial system.