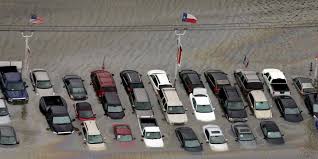 Hurricane Harvey Could Be the Costliest Storm in U.S. History

As the floodwaters left by Hurricane Harvey finally begin to recede, experts are beginning to wrap their heads around the extent of the storm’s economic toll in Houston and beyond.

Estimates from earlier this week suggested that Harvey could result in $ 30 billion to $ 40 billion in damage and economic losses. But after the slow-moving storm dithered over Houston and dumped an estimated 50 inches of rain on parts of the city, risk analysts have increased their estimates.

Moody’s Analytics Chief Economist Mark Zandi said Thursday that he expects the total property damage to homes, cars, commercial buildings and infrastructure to fall between $ 75 billion to $ 95 billion. He also estimates that economic losses, caused by paused production at oil refineries and other businesses, will reach about $ 12 billion.

Other estimates are slightly more modest. Enki Research, a risk modeling agency, said it expects the damage and economic losses to reach between $ 72 billion to $ 85 billion. “That is our current ‘best estimate,’ which would put Harvey well ahead of Sandy and [make it] the second most costly hurricane in modern U.S. history,” wrote Enki risk modeler Chuck Watson in a Thursday note. Hurricane Katrina was the country’s costliest such storm, resulting in an estimated $ 120 billion in damages and economic losses, by Watson’s estimates.

But some experts say Harvey’s economic toll could be even higher than that of Katrina. The Perryman Group, a financial analysis firm, estimates Harvey could cost the U.S. gross domestic product $ 145 billion, with Texas taking the brunt of the impact. Separately, AccuWeather Chairman Joel Myers said that he expects the hurricane to cost $ 190 billion. His analysis assumes that parts of Houston will be left uninhabitable for weeks or even months, while also taking damage in Louisiana into account.

Harvey could wind up costlier than Katrina in part because Houston is a larger city than New Orleans with a bigger economy. The Texas city was home to about 2.3 million people in 2016, with a GDP of about $ 471.3 billion in 2015, the most recent data available. (Houston has the country’s fourth largest economy by city). When Katrina hit New Orleans in 2005, that city’s population was below a half-million, with an annual GDP of about $ 72.6 billion. A storm that slams a more populated and more economically productive area is bound to have a greater effect.

Still, experts caution it’s too early to place an exact figure on Harvey’s impact. “Because of the extraordinary nature of this event, it is largely impossible to know the full impact to the Gulf Coast region and the state and nation as a whole, at least until well after the flood waters have receded and the full extent of the damage is seen,” wrote Ray Perryman of the Perryman Group.

What is for certain is that much of the damage wrought by Harvey will fall on consumers or the government rather than insurers. About 70% of those affected by the flooding don’t have flood insurance, according to CoreLogic, a property analytics firm. That’s because their property lies outside the federally-designated floodplain. CoreLogic estimates that losses stemming from residential properties alone will be around $ 25 billion to $ 37 billion.

Still, Moody’s Zandi says that while Texas’ recovery will be painful, it may go more smoothly in the long term compared to post-Katrina cleanup. New Orleans struggled to recover in part because a large number of people left the city and never returned. That’s unlikely to happen in Houston, where the population and economy have both been growing. New Orleans, on the other hand, had been losing jobs even before Katrina, according to the St. Louis Federal Reserve.

Harvey should not have an immediate effect on the country’s overall economic growth, according to Morgan Stanley analysts. GDP growth could slow slightly as Houston’s economic output drops, but that should be more than offset by the effect of rebuilding efforts that will require significant manpower and material.

But any GDP bump from the recovery efforts will be temporary at best, according to Solomon Hsiang, associate professor of public policy at the University of California Berkeley. Hsiang conducted a study on the long-term economic effects of some 6,700 cyclones, concluding that such storms dampen global GDP growth because they divert resources that could have been invested elsewhere. In fact, in a world without cyclones, global GDP growth would be 3.8% rather than the 2% commonly seen today, she found. Hsiang’s findings suggest that storms like Harvey continue to hold back the economy in the long run. “It leaves the whole country worse off,” Hsiang said.