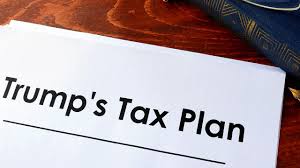 President Trump Said He Wants Tax Reform Like in 1986. But He Once Called That Bill a ‘Catastrophe’

In a speech Wednesday, President Trump cited the 1986 tax reform as a model for the kind of bipartisan effort he wants this fall, but in a 1999 op-ed he called that bill “a catastrophe.”

During a visit to Springfield, Missouri, Trump called for a bipartisan effort to simplify the tax code, praising the reform signed by President Reagan in his second term which simplified the code and simultaneously lowered the top tax rate and increased the bottom rate.

“Under this pro-America system, our economy boomed,” Trump continued. “It just went beautifully, right through the roof. The middle class thrived, and median family income increased.”

Government data shows that median family income did not increase in the mid 1980s after the bill was passed, and actually declined between 1989 and 1993.

The praise for the 1986 bill marks a reversal for Trump, who was previously heavily critical.

In 1991, according to footage published by the New York Times, Trump testified before Congress about the law, where he derided the bill as an “absolute catastrophe.”

“I really hope that something can be done to change at least parts of it, because it has taken all incentive away from investing in real estate really means so many jobs,” he said in the clip published by the Times.

And in a 1999 op-ed in the Wall Street Journal about then-presidential candidate Bill Bradley, who had sponsored the bill, Trump described it as “an offense against the working man.” He acknowledged there were positive aspects of the legislation—the tax cuts, which he credited to Reagan—but he slammed the portion of the bill that eliminated tax shelters for real estate investments, which he said hurt his business.

“Businesses make billion-dollar decisions based on the tax code,” he wrote at the time. “When sweeping changes are abruptly enacted, as they were by Mr. Bradley, it puts those businesses in a bad spot.”