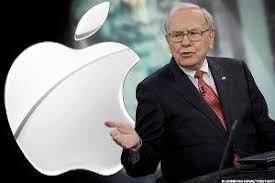 The Berkshire Hathaway (BRK.A) CEO, 86, famously avoided tech stocks for decades, saying, “If there’s lots of technology, we won’t understand it.” However, Berkshire started buying shares of Apple in mid-2016 and ended the year with about 59 million shares in the tech company. In early January, Berkshire more than doubled that stake to 133 million shares. The increased stake gives Berkshire about 2.5% of Apple’s outstanding shares.

Apple’s stock has increased 40% from $ 116.15 at the beginning of the year to $ 162.91 as of Tuesday’s market close, meaning Berkshire has made roughly $ 6.2 billion off its 133 million shares, which are now worth about $ 21.7 billion. However, because Berkshire first disclosed a stake in Apple in the first half of 2016 when shares were trading just above $ 100, investors can assume Berkshire has made even more money off of its Apple stake.

When Buffett was asked why he added nearly 76 million Apple shares to his holdings in January, he replied simply, “Because I like it.” Buffett noted that Apple has created a difficult-to-escape ecosystem with its products. “Apple strikes me as having quite a sticky product, and an enormously useful product to people that use it,” he said on CNBC.

“The degree to which people’s lives center around the product is huge,” Buffett said of the iPhone, even as he revealed that he didn’t have one himself.

The Oracle of Omaha also said during the interview that he thinks Apple will be the first company to reach a $ 1 trillion valuation. “I’d bet on Apple just because they’ve got a stronger position,” he explained.

Apple is a holding in Jim Cramer’s Action Alerts PLUS Charitable Trust Portfolio.Want to be alerted before Cramer buys or sells AAPL? Learn more now.