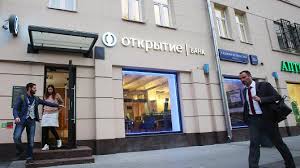 Russia, in one of biggest bail-outs in its history, rescues Otkritie bank

MOSCOW (Reuters) – Russia’s central bank launched one of the biggest banking bail-outs in its history on Tuesday, saying it would rescue troubled private lender Otkritie which has suffered a sustained run on its deposits amid worries about its loan portfolio.

The central bank said it planned to tap its own funds in order to become a major investor in Otkritie, the country’s seventh-biggest bank by assets according to Interfax data.

The bail-out is likely to stoke anxiety about the wider state of the Russian banking sector, fuelling speculation that other big banks may have similar problems. It also raises questions about the central bank’s supervisory performance.

Otkritie is the country’s largest private lender by assets, according to second-quarter data from Interfax, and some of its shareholders are connected to major state entities, a fact that prompted some analysts to believe it was too big and influential to be allowed to fail.

“On one hand, the central bank’s comment (on Otkritie) is a relief for the market,” said Dmitry Polevoy, chief economist at ING Bank in Moscow.

The central bank did not say how much it was spending on the bail-out, but said it planned to take a minimum 75 percent stake after evaluating Otkritie’s financial position. Until now, the biggest banking bail-out in Russia was a 395-billion-rouble (5.20 billion pounds)rescue of Bank of Moscow in 2011, Russia’s fifth-biggest lender by assets at the time.

Otkritie bank, part of the wider Otkritie group, grew rapidly in recent years, snapping up banks such as Nomos, non-pension funds and insurers, and even the diamond business of Russian oil producer Lukoil (LKOH.MM).

But Dmitry Tulin, the central bank’s first deputy chairman, told a news briefing that its business practices had been questionable.

“This (expansion) was financed via borrowing and key risks were taken,” he said. “The bank’s operations are connected to high risks and need to be seriously changed.”

He said the central bank had known of Otkritie’s problems before he began supervising the sector.
CLEAN-UP

The regulator will now assess the bank’s provisions and capital, a process that will take up to three months. If the bank’s capital is deemed to be in the red, Otkritie shareholders would lose their ownership rights completely.

“The capital disclosed in (the previous) reports seems to have been significantly higher than in reality,” said Tulin.

According to Otkritie’s latest financial statements, for 2016, it had a non-performing loan ratio of 7.5 percent, while its Tier 1 capital was at a healthy 12.3 percent comparable to the country’s top lender Sberbank (SBER.MM).

Its capital ratio, last disclosed as of Aug. 1 under Russian accounting standards, was above the central bank’s requirements.

The central bank said Otkritie’s owners and executives had agreed to cooperate to help restore the lender’s balance sheet. In the meantime, Otkritie and its businesses would operate as usual, it said.

Otkritie said it welcomed the bail-out.

“This is positive news for the bank’s clients and the whole banking sector,” Managing Director Alexander Dmitriev said in a statement. “I want to underline that the bank’s shareholders have turned to the central bank themselves.”

The central bank is trying to clean up the banking sector, shutting down banks it believes pose a risk to the system. It revoked the license of Yugra Bank, a top 20 lender, last month after saying it had falsified its accounts.

Investors began to sell off Otkritie’s shares this month and Moody’s put its ratings on review for a possible downgrade soon afterwards, saying it was concerned by the “elevated volatility of the bank’s customer deposits, which puts pressure on its liquidity position”.

In June and July, Otkritie’s customer deposits contracted by 435 billion roubles ($ 7.40 billion), equivalent to 18 percent of the bank’s total liabilities as of June 1, Moody’s said.

The central bank said that corporate clients withdrew 389 billion roubles from the bank between July 3 and Aug. 24, with another 139 billion taken out by retail clients.

Rouble liquidity in the Russian interbank market rose unexpectedly this month as the banking sector started borrowing more from the central bank, seen as a symptom of deteriorating trust in the interbank lending market.

“At a certain point, the bank owners realized they couldn’t solve the issue with capital on their own and turned to the central bank with a proposal to start discussing financial rehabilitation measures,” Tulin told reporters.

Otkritie is 65 percent owned by Otkritie Holding, which in turn is owned by a group of executives from oil major Lukoil (LKOH.MM), state-owned VTB bank (VTBR.MM), Otkritie and others.

Shares of Otkritie rose 2.4 percent on the central bank’s announcement. Otkritie’s $ 500 million bond, which matures in April 2019, was up 34 cents, according to Tradeweb data, while the November 2019 issue jumped 11 cents.

Additional reporting by Katya Golubkova and Jack Stubbs in MOSCOW and by Alexander Winning and Sujata Rao in LONDON; Editing by Andrew Osborn and Susan Thomas