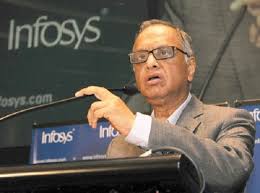 Infosys Ltd founder Narayana Murthy on Tuesday defended his role in a months-long war of words with the company’s board that led to changes at the top, saying his actions were in the interest of shareholders.

Speaking to investors on a conference call, Murthy said he hoped the company’s management would rally behind Nandan Nilekani, a co-founder and a former Infosys CEO, who was named as non-executive chairman last week.

Vishal Sikka, the first CEO of Infosys drawn from outside its founders, resigned this month, blaming Murthy for creating an “untenable atmosphere”.

Sikka’s sudden exit sparked a sell-off that wiped billions of dollars off Infosys’s market value, forcing India’s No. 2 IT services firm to reshuffle its board and bring back Nilekani.

On Tuesday, Murthy reiterated concerns about the previous board’s corporate governance practices, including the “excessive” severance paid to a former finance chief, but expressed hope that things would take a turn for the better under Nilekani’s leadership.

“In fact, based on Nandan’s media interviews and the recent changes in the board, I believe that corrective actions have already begun,” Murthy said.

The return of Nilekani, who is credited with quadrupling Infosys’ revenue to $ 2 billion, has cheered investors – he is widely expected to end the board’s row with founder executives, help clients and boost employee morale.

Nilekani told investors last week his priorities were to find a CEO, reconstitute the board and shape future strategy.