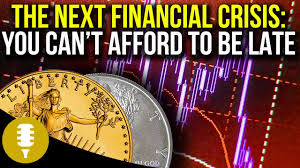 The Next Financial Crisis… And What You Should Do About It

A recent front-page article in USA Today could hardly have been more blunt:

Congress will confront a potentially devastating financial crisis in September as lawmakers scramble to avert a government shutdown and prevent the nation from defaulting on the debt for the first time in history.Treasury Secretary Steven Mnuchin has warned congressional leaders that the government will run out of money to pay its bills by September 29 unless lawmakers vote to raise the debt limit…

The government has never defaulted on its debt before, and no one knows for sure what the impact would be.

Economists warn that it could plunge the USA back into recession and spark a global economic crisis.

“Hard news” has seldom been more breathless. Or more ridiculous.

Let me spare you the suspense. The United States of America is not going to default on its sovereign obligations.

Why not? Because a) it would be catastrophic and b) it is avoidable.

I’m not saying there won’t be a showdown between Republicans and Democrats. There will.

The federal debt is about to hit the statutory limit of $ 20 trillion. Congress needs to pass a spending deal to keep the government funded beyond September 30, when fiscal year 2017 ends.

The conservative House Freedom Caucus will oppose any increase in the debt that is not tied to spending cuts. The Democrats, on the other hand, do not favor cuts. They will support only a so-called “clean” increase in the limit with no strings attached.

But let’s get serious. U.S. Treasurys are the safest credit on the planet. No individual, no business and no nation has the size, the security or the resources to challenge its creditworthiness.

If the U.S. defaulted on its debt, who would make good on their own? No one. It would rapidly become a financial fiasco of stupendous proportions.

Everyone in Washington knows this. That’s why – despite all the bluster – a default won’t happen.

The game of chicken playing out right now between the two major parties is a farce, complete with air bags, seat belts, helmets and a speed of about 5 mph.

This doesn’t mean that the mere threat of default can’t have a serious impact on the market. In the 2011 debt-ceiling panic, the S&P 500 fell 17% in two weeks.

If, in a worst-case scenario, political brinkmanship led to an actual default, it would be temporary, lasting only a few days. Why? Because that’s all the pain our elected misrepresentatives could take.

Gerrymandering has allowed them to pick the voters rather than the voters picking them. (How else do you explain Congress’ 16% approval rating and 98% re-election rate?) But their incumbency isn’t written in stone.

An actual government default might rankle people enough to make them vote for someone else.

For politicians, it’s not North Korean nukes, international terrorism or a financial crisis that is really scary. It’s the thought of losing their personal staff and limousines, and having to go back to honest work.

If the national media’s scare tactics – like the USA Today article above – encouraged you in the past to run to cash because of the looming – take your pick – Fiscal Cliff, Government Shutdown, Debt Default or threat of Sequester, take heed.

We have intransigent parties, political gridlock and a capricious president.

But a U.S. government default isn’t going to happen. (At least, not anytime soon.) Or, if it does, you’ll be able to measure it in hours.