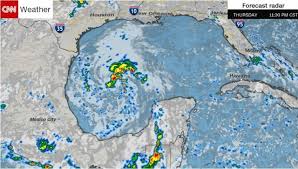 Hurricane Harvey is barreling down on vital oil and gas facilities on the U.S. Gulf Coast that serve as the nerve center of America’s energy infrastructure.

The biggest risk is that this potential Category 3 storm causes prolonged disruptions to the critical refineries along the Texas Gulf Coast, which is home to nearly one-third of the nation’s capacity to turn oil into gas, diesel and other products.
By early Friday, warnings of “life-threatening” rain from Hurricane Harvey have forced the evacuation and shutdown of several refineries. Gasoline prices are poised to rise steadily higher depending on the severity of the damage and length of outages.

Not only will the storm limit the Gulf Coast’s ability to refine oil, but it’s already shut down the flow of oil shipments in and out of the Port of Corpus Christi, the nation’s leading port for crude oil exports.

“We may have never had a storm like this. The impact on the energy industry could potentially be devastating” for the next week, John LaRue, executive director of the Port of Corpus Christi, told CNNMoney.

The port has worked all week to prepare for the storm. LaRue said pilots stopped boarding vessels Thursday afternoon and maintenance workers have tied down everything that projected winds of 125 miles per hour could “turn into missiles or projectiles.”

Hurricane Harvey also forced the shutdown of the Houston Ship Channel on Friday for incoming and outgoing vessels, Platts reported.

To meet America’s enormous appetite for oil, more than 3 million barrels of waterborne crude gets shipped to the U.S. Gulf each day from places like Mexico, Colombia and Saudi Arabia, according to ClipperData. The U.S. Gulf Coast also exports about 1 million barrels of crude each day to customers overseas.
hurricane harvey texas oil energy

Hurricane Harvey is also disrupting oil and natural gas production in the Gulf of Mexico and inland as energy companies evacuate rigs and platforms. ConocoPhillips (COP) said Friday that it suspended all operations in the Eagle Ford shale field and evacuated some personnel from a platform in the Gulf of Mexico.

The U.S. Gulf of Mexico is home to almost one-fifth of total U.S. oil output, according to the EIA.

Harvey is the first major hurricane to seriously threaten the U.S. Gulf Coast in several years. Hurricanes Gustav and Ike in 2008 as well as Hurricane Isaac in 2012 all knocked more than 1 million barrels of Gulf oil production offline, according to the EIA. Those hurricanes also temporarily disrupted refining capacity.

Hurricanes that land in Texas tend to have little impact on oil production, but more significant consequences for refining, according to Tom Kloza, chief oil analyst at the Oil Price Information Service.

Related: Gas prices will jump thanks to Hurricane Harvey

Harvey is projected to first strike near Corpus Christi, which is home to five different refineries that can process up to 868,000 barrels per day, according to Kloza. That’s roughly 4% of the country’s refining capacity.

The National Weather Service predicts the storm will then move north along the coast towards Houston, which is an even bigger refining center. The Houston, Texas City and Baytown region have 11 refineries that can handle 2.7 million barrels per day, according to Kloza. That’s about 14% of the country’s refining capacity.

“If the storm camps out between Corpus Christi and Houston for several days, infrastructure will stay offline for longer and there will be bigger impacts on pricing,” said Jenna Delaney, senior oil analyst with S&P Global Platts.

Kloza said that normally refining is knocked offline for just a brief time, making the impact on prices just fleeting. But that depends on the severity of the storm.

“Katrina was the exception,” Kloza said, referring to the 2005 storm that badly damaged Gulf Coast operations.

A Category 3 storm could create outages of two to three weeks due to massive power outages, wind damage and flooding that make it challenging for workers to return, Kloza said.

He predicted Harvey is likely to cause only a short-term jump of 5 to 10 cents per gallon in gas prices, though he said a 25-cent spike in a worst-case scenario is also possible.

“You’re talking about a situation where a month from now gas prices will probably be lower. But a week from now they’ll be higher,” said Kloza.