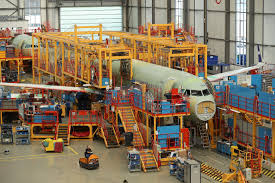 American manufacturers are holding off on big purchases, according to data released Friday by the Commerce Department.

The number of orders for big-ticket items fell 6.8% in July — the largest drop in three years. Economists predicted a 6.9% decline, according to a MarketWatch Survey.

Durable goods tend to be expensive items, like furniture, appliances, and heavy machinery. Businesses tend to make big investments in those items when they feel confident about the economy. But there’s a wrinkle in the July report. This decline is due largely to a drop in just one company’s orders: Boeing.

But there’s a wrinkle in the July report that runs counter to that rule. Last month’s decline is due largely to a drop in just one company’s orders: Boeing.

If the transportation numbers were excluding from the July durable goods report, orders would have seen gains for the third straight month, rising 0.5%.

Orders for core capital goods rose last month by 0.4%. This category, a proxy for business investments, hasn’t seen a decline since 2016.

July numbers for shipments of core capital goods, used to calculate quarterly economic growth, saw the fastest pace of growth since February. However, defense spending is supports a large portion of orders for durable goods. When excluding the defense sector, orders fell 7.8% last month — the biggest drop in three years.