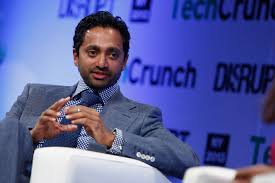 The fintech revolution in India is in full force.

When India’s Prime Minister Narendra Modi decided to ban 85% of the country’s currency, the majority of cash became effectively worthless. As the country grapples with how to turn a mostly informal $ 2.2 trillion economy into a digital one, a number of startups are popping up to make the transition slightly less painful.

“Your mobile phone can be turned into your bank and wallet,” Modi said in November, urging people to download e-payment options. “Today’s tech can help you use it for purchasing things, making payments.”

At the center of some of this fintech is Ezetap, a Bangalore-based mobile payments startup that just raised $ 16 million in funding from investors including JS Capital Management, Social Capital, and Horizons Ventures. In total, the company has raised more than $ 51 million in venture capital.

“Demonetization was only one step in a multi-step government program to digitize the Indian economy,” said Ezetap CEO Bobby Bose. “It woke people and businesses up and made digitization a must-do instead of a nice-to-have. Hence, the macro trend that we all knew was going to happen over a decade is now happening in two to three years.”

India expects a six-fold growth in digital transactions to 25 billion by March 2018, and the six-year-old startup hopes to be the one to lay the groundwork for India’s payment infrastructure.

The company is currently working with small businesses and merchants across the country, but some of India’s larger corporations and government agencies are also integrating their software systems with Ezetap.

“When demonetization happened in India, [Ezetap’s] business exploded,” Palihapitiya says. “Now, you can’t rely on the shadow payment system of using the high-value currency notes because they were rendered useless. You have to rely on cards, wallets, and more traditional financial infrastructure.”

This is not Social Capital’s only investment in India, but it is its most significant. Palihapitiya believes the country is on the brink of a massive surge in consumer consumption, but says it won’t happen until the underlying payments infrastructure is securely in place.

“At the end of the day, you have 1.2 billion people who will be earning more, and they will want to buy stuff,” Palihapitiya says. “The future for fintech in India is bright for companies that figure out ways to get consumption power in the hands of Indians.”