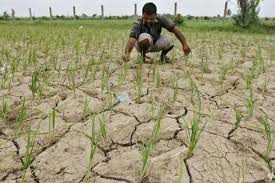 India’s rainfall deficit for the June-September monsoon season has widened to 6 percent as of Wednesday, the highest since the season’s start on June 1, data compiled by India Meteorological Department (IMD) showed.

Rainfall that is nearly a fifth lower than normal so far in August has raised the deficit and stoked concerns about the production of summer-sown crops such as rice, cotton, oilseeds and pulses.

The central state of Madhya Pradesh, and the states of Haryana and Uttar Pradesh in the north, as well as the southern states of Karnataka and Kerala have received rainfall that is over 20 percent lower than normal.

The monsoon rains deliver about 70 percent of India’s annual rainfall and are critical for farmers because about half of their lands lack irrigation. Farming accounts for 15 percent of India’s $ 2 trillion economy and employs more than half of its 1.3 billion people.

In June, the IMD forecast this year’s monsoon rains at 98 percent of the 50-year average of 89 centimetres.