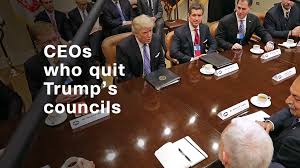 Eight people have left President Trump’s manufacturing council in recent days amid the extraordinary uproar sparked by the violence in Charlottesville.

Others have opted to stay, even under pressure from grassroots groups. Some argue it’s more valuable to have a seat at the table when the government is shaping policy that affects their companies.

The names of the members below come from official White House lists published at the time each group was announced. CNNMoney has reached out to all the members of the manufacturing panel, and a second presidential council on the economy, to ask where they stand.

This list will be updated as developments require or new information comes in.

Formed in January to advise Trump on job growth in manufacturing.

Executives no longer on the council:

Executives who have said they are staying:

Executives who declined comment or have not responded to CNNMoney:

(Note: Klaus Kleinfeld, Arconic, and Doug Oberhelman, Caterpillar, were listed as members of the jobs group. Both have left their companies and it is not yet clear whether they were replaced.)

This economic advisory group was created in December. Officials said Trump would call upon them to share experience and knowledge as he implements his economic agenda.

Executives who have left the group:

Executives who have said they are staying:

Executives who released statements about Charlottesville but did not explicitly mention their council roles:

Executives who declined comment or have not responded to CNNMoney: