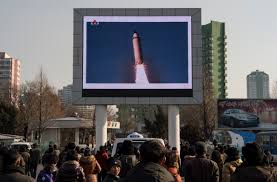 Amid rising military tensions between North Korea’s Kim Jong-Un and U.S. President Donald Trump, who early on Friday said solutions were “locked and loaded,” the global stock market has taken a dive. That is, except for Samsung.

The electronics giant headquartered in nearby Seoul, South Korea has been surprisingly resilient during its northern neighbor’s ballistic tests. While the company’s stock has fallen about 6% since the start of the week by noon on Friday, its shareholders have largely grown accustomed to viewing North Korea’s missile tests as empty threats.

Samsung’s proximity to the activity in North Korea means an attack could cripple the tech sector in the region. And yet after each of the 12 missile tests the country has conducted since February, the stock only experienced relatively minor turbulence the next day.

In fact, over that time period when the missile launches occurred, Samsung’s stock actually outperformed both the S&P 500 Index (up 6.7%) and the Korea Stock Exchange (up 18.3%). The stock price for the tech company rose 27% from February 10 to July 31.

But as Fortune editor-at-large Shawn Tully has pointed out, the threat to global companies based in surrounding countries is significant.

“Of the companies on Fortune’s annual Global 500 list, 72 are based in Japan, South Korea, and Taiwan, with Japan heading the list at 51,” he writes. “Their revenues total $ 3.735 trillion, or one in every eight dollars of the Global 500’s sales.