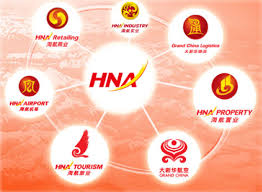 As questions mount over who exactly owns the Chinese conglomerates that are now heavily invested in the U.S. and Europe, the mammoth HNA Group has revealed that more than 82% of the company is concentrated in the hands of its two chairmen and HNA’s charity organization.

The company detailed its ownership structure on Monday amid growing scrutiny.

Privately-held HNA is among the fastest growing companies on Fortune’s Global 500 list of the world’s largest corporations. The sprawling conglomerate has leaped from No. 464 in the rankings two years ago to No. 170 this year, with $ 53 billion in revenues in 2016. Factoring in new acquisitions, HNA is expected to generate about $ 100 billion in sales this year, which would easily place it among the biggest 100 companies on the planet.

HNA’s rocketing expansion has been fueled by billions in debt, much of it from China’s state-owned banks. The company has pushed aggressively into U.S. and European markets—taking large stakes in brand-name companies such as Hilton hotels and Deutsche Bank and snapping up other companies and properties outright. In January, HNA paid some $ 200 million to acquire a majority stake in SkyBridge Capital, the investment firm founded by high-profile Wall Street veteran Anthony Scaramucci, who on Friday was named White House Communications Director.

Top executives of HNA spoke to Fortune in recent weeks for a feature story in Aug. 1 issue of the magazine detailing the company’s rise and its executives’ ambition to grow it into one of the world’s 10 biggest companies.

Yet despite long interviews with HNA’s CEO Adam Tan and its billionaire co-founder and chairman Chen Feng, key questions over the group’s ownership structure remained unanswered at that time—even after repeated questions by Fortune over who owns what stakes in the company. Last week, HNA’s external public-relations agency relayed to Fortune that the company’s charity, Hainan Province Cihang Foundation, owned 22.75% of the group, while the remaining 77.25% of the shares were held by 18 individuals whose identities remained secret.

According to the figures released today, however, the foundation in fact owns 52.25% of HNA—with 22.75% held by the branch that’s registered in China, and 29.50% held by the international foundation, registered in New York. Aside from that, HNA’s two chairmen, Chen Fang and Wang Jian, each hold 14.98% of the company, while CEO Adam Tan holds a 2.95% stake, according to the company. Nine other directors hold a total of 14.63%. And the Hainan Airlines Holding Company owns 0.25%. (Ownership stakes are rounded to two decimal points.)

In a statement accompanying the ownership information, HNA acknowledged that there is “a great deal of interest in who we are and how we are structured” due to the company’s rapidly increasing size and global reach. “Although we are a private company with no obligation to disclose our ownership, we respect and appreciate the desire for transparency in this regard,” said the statement. HNA also said that it planned to update ownership details on “an annual basis” going forward.

Noting that the charity holds more than 50% of the company, HNA’s statement said that portion is expected to rise over time because all of the individual shareholders have pledged to donate all of their shares to the foundation upon death or resignation from the company. According to the statement: “We expect that the Cihang Foundation will one day own 100% of HNA Group. That has always been our intention.”

It remains unclear whether the ownership structure has materially changed in recent days, or whether the closely-held company has just opted to reveal more accurate details of its top shareholders.

The revelations about HNA’s ownership come as questions swirl in China, the U.S., and Europe, around just who controls the company—including whether hidden powerful figures have benefited hugely from the company’s runaway expansion.

A story in the New York Times last week explored the complicated network of family and friends that are connected to HNA, including Wang Wei, the younger brother of co-chairman Wang Jian. Wang Wei, now a billionaire, is tied to more than a dozen companies that do business with HNA, according to the Times.

The company’s opaque ownership structure appears to have led Bank of America to freeze any business dealings with HNA, according to another New York Times piece. It cited a June 28 internal bank email from Bank of America’s Asia Pacific president Matthew M. Koder, saying, “We simply don’t know what we don’t know, and are not prepared to take the risk.” In his email, Koder told an unnamed colleague or colleagues that “given the importance of maintaining rigorous client selection standards, we have decided not to be involved with transactions with the HNA Group at this point in time.”

HNA released a statement last week in response to reports of BofA’s caution: “Both directly and through its subsidiaries, HNA Group partners actively with many global investment banks and continues to do so. We carefully select our financial advisers and financing sources on each transaction, based on specific capabilities and expertise, consistent with our commitment to global best practices in all of our overseas acquisitions and financing.”

And shortly after this story published, HNA provided Fortune with an additional statement: “We strongly contest that major global investment banks have stopped working with HNA Group. HNA Group actively partners with various global investment banks, both directly and through its subsidiaries, and continues to do so. With the exception of some modest asset-backed financing provided to some of our leasing subsidiaries, where business continues as usual, HNA Group has never engaged [Bank of America Merrill Lynch] for any significant business.”

Citigroup and Morgan Stanley have also decided to stay clear of financing deals with HNA, according to Bloomberg.

That could be bad news for HNA, whose expansion has depended heavily on borrowing—including from major Western banks. HNA execs told Fortune they were easily able to tap Western loans, with which they could keep buying up assets in Europe, the U.S. and elsewhere outside its home region.

Those loans are increasingly important, as China’s banking regulator scrutinizes HNA’s loans. Late last year, the government reined in overseas investments by Chinese conglomerates, and last month the banking regulator, CBRC, ordered its banks at home to examine the billions they have lent HNA and three other major groups, in an effort to determine whether high-risk debts could imperil its economy.

In several interviews, HNA execs have said they are effectively immune from China’s actions, since at least half the group’s revenue now comes from its companies outside China, which could be used to acquire more foreign assets; in the past two years, HNA has snapped up 25% of the Hilton hotel group, 100% of the U.S. company Ingram Micro, the world’s biggest tech distributor, and multiple other properties.

“Cash flow outside [China] is very strong,”Guang Yang, chief investment officer of HNA Capital, the group’s financial services branch in Beijing, told me in an interview in Paris in early July. “We are still looking at acquisitions,” he said. “Foreign banks are very happy to finance acquisitions outside.”

At stake are key questions that cut to the lack of transparency within Chinese conglomerates, and whether that secrecy is hiding involvement from top officials of the government or ruling Chinese Communist Party. HNA denies those accusations, and in June, it sued the exiled billionaire Guo Wengui for defamation in the New York State Supreme Court, for charging that key political figures in China held secret blocks of shares in HNA. HNA’s co-chairman Chen has called that a “pack of lies.”

Yet HNA has not chosen previously to open its books on the group’s ownership structure. That left others to discern that high-level political connections have allowed HNA to borrow freely and expand rapidly, at a time when others have faced hurdles doing so.

“A company cannot obtain lines of credit without either being a state-owned enterprise or high-level connections with the political elites,” says Victor Shih, associate professor of political economy at the University of California at San Diego. “There are hundreds of Chinese companies trying to borrow billions overseas, and only a few obtain these large lines of credit.”

Also under increasing scrutiny is HNA’s debt load to state-owned Chinese banks. In December, for example, it bought Ingram Micro for $ 6 billion—in cash—in a deal partly financed by the Agricultural Bank of China, China Construction Bank, Bank of China, and others, according to information given earlier this month to Fortune. In the minds of some, HNA—a privately held company—is increasingly tied to China’s government, through its heavy debt.

“HNA is becoming a de facto state-owned enterprise,” says Will Horton, a Hong Kong-based analyst for Capa Center for Aviation, who has studied HNA; HNA began as Hainan Airlines, and is heavily invested in aviation. “HNA has made its acquisitions largely through debt, often from state-owned banks,” Horton says. “There are growing concerns about HNA’s high gearing.”

Untangling fine details over HNA’s ownership structure is highly difficult, say analysts, who caution that much of the details are inaccessible, through a web of different companies. “The [Chinese] elites are very practiced at using dozens of shell companies to conceal ownership,” says Shih.