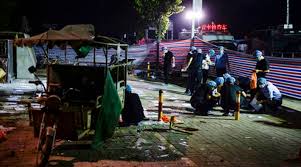 BEIJING Eight people were killed and 65 injured on Thursday in an explosion at a kindergarten in eastern China that police have described as a “criminal” act, state media said.

The official Xinhua news agency reported that police had made a preliminary judgement that the blast was a “criminal offence” and they had identified a suspect.

The blast took place around 5 p.m. near the entrance of the kindergarten in Xuzhou, in the coastal province of Jiangsu, the official Xinhua news agency said.

Two people died on the spot and six more died of their injuries in hospital. Xinhua reported that the number of injured had risen to 65 by 11 p.m. on Thursday, with eight in critical condition.

Local authorities held an early-morning press conference on Friday and said that contrary to early reports the blast did not occur while parents were picking up children after school, according to the People’s Daily. No kindergarten students or teachers were injured in the blast.

Pictures circulating on Chinese social media showed about a dozen women and children lying on the ground in what appeared to be the immediate aftermath of the blast.

One video showed an injured woman with scorched clothing staggering unsteadily, while others sat on a floor holding crying children in their arms.

Reuters could not independently verify the authenticity of the videos. None of the casualties were children or teachers, Xinhua said.

Blasts and other accidents are common in China, because of patchy enforcement of safety rules, although the government has pledged to improve checks to stamp out such incidents.

Police from Xuzhou city urged social media commentators to share only information from official channels after some users posted videos of an April explosion which they said depicted Thursday’s incident.