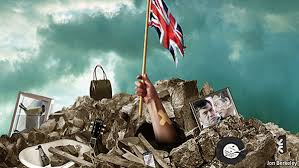 The U.K. economy is in trouble. Politics could make it worse

The British economy is in trouble. And it could get much worse.

What started as a smattering of worrying economic data points has turned into a flood in recent weeks. Consumers, hammered by rising prices, have snapped their wallets shut. Political turmoil has caused business leaders to put investments on hold.

The latest warning signs came Monday, as Prime Minister Theresa May was still scrambling to form a government after last Thursday’s election wiped out her parliamentary majority.

Visa said that consumer spending fell for the first time in nearly four years in May as households were squeezed by rising prices and stagnant wages. The payments firm said that brick-and-mortar retailers were the hardest hit, with sales falling at the fastest rate in more than five years.

The data predate last week’s vote, which threw the country’s politics into disarray and added to uncertainty over plans to exit the European Union. May is trying to do a deal with a fringe party to stay in power.

More than 90% of business leaders surveyed by the Institute of Directors said the election results were a concern for the economy. Just 20% of executives said they are now optimistic about the economy’s performance over the next 12 months, while 57% said they were pessimistic.

“It is hard to overstate what a dramatic impact the current political uncertainty is having on business leaders, and the consequences could — if not addressed immediately — be disastrous for the economy,” said Stephen Martin, director general of the Institute of Directors.

Britain’s economy was hurting even before the election, with consumers caught in the vice of higher prices and stalled wage growth.

The dynamic began to develop last year, when voters in the U.K. chose to pull their country out of the EU. Investors, worried about the economy’s ability to thrive without preferential access to Europe’s vast markets, quickly sent the pound to its lowest level in decades.

The currency is still trading 15% below its level on the day of the Brexit referendum. Its weakness has boosted the share prices of U.K. companies that do most of their business abroad, but it has also pushed up prices of food, drinks and other imported products at home.

There are problems in the labor market, too: Unemployment is very low, but companies have not responded by paying higher wages to their workers. As prices rise, people are having to borrow more. Central bank data show the amount of debt carried by Britons on their credit cards increased by nearly 10% in the year ended April.

“More of us are starting to feel the squeeze,” Visa executive Kevin Jenkins said Monday.

Related: Is U.K. election the end of austerity?

The trend has contributed to a stunning reversal of the country’s economic fortunes. In 2016, the U.K. posted stronger growth than any other member of the G7 group of leading industrialized nations. But its performance in the first three months of this year was the weakest in the G7, and across all 28 EU members.
chart eu gdp growth 2017

Brexit is likely to bring more economic pain, even if May is forced to water down her plans for a clean break with the EU to attract support in parliament.

May had promised to take Britain completely out of the bloc’s common trading area and reduce the number of people coming from the EU. She had even threatened to walk away from Europe without paying a hefty divorce bill or striking a new trade deal.

Since the election reversal, some big businesses have seized on the opportunity to renew their case against plans for a so-called “hard Brexit.”

The Sunday Times reported that Airbus (EADSF) has threatened to move new production out of the country if it faces new trade barriers or restrictions on the ability to recruit EU workers for jobs in the U.K.

Airbus employs thousands of people in the U.K. and spends around $ 5 billion a year with suppliers in the country.

“For new productions, it’s very easy to have a new plant somewhere in the world. We would have plenty of offers to do that,” Chief Operating Officer Fabrice Bregier told the newspaper.

The government’s top Brexit official, David Davis, warned on Monday that negotiations with the EU may not start as planned on June 19, another indication that political confusion has overwhelmed May’s policy agenda.
uk economy down

The pound fell 0.7% to trade below $ 1.27, while also hitting its lowest level against the euro this year.

In the meantime, some drastic changes are already taking place. The Health Foundation, an independent charity, released data on Monday that show the number of nurses from the EU registering to work in the U.K. has plunged 96% since the Brexit referendum.

Health care and many other industries rely on immigrants. Business lobby CBI said Monday that the U.K. needed to adopt a new mindset on Brexit, for one so that companies could have access to the skills and labour they need.