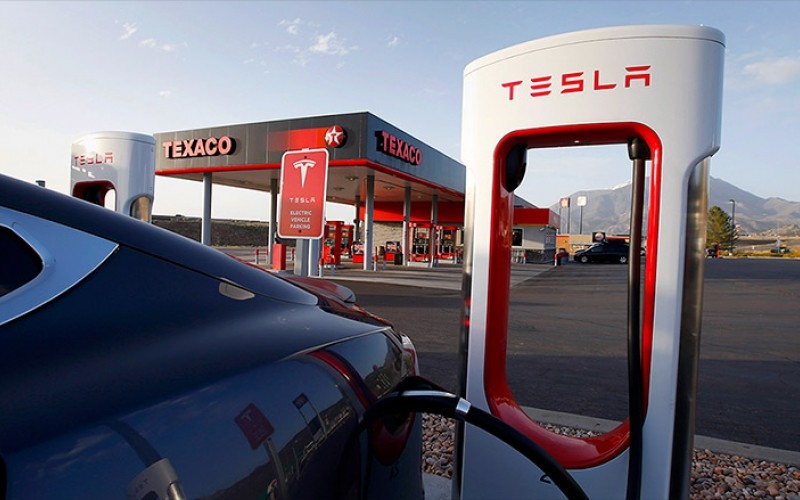 Oil has a Tesla problem. But when will it hit?

ExxonMobil executives would be wise to worry about the explosive growth of Tesla, which this year surpassed both Ford and General Motors as America’s most valuable car maker.

Consider that nearly half (45%) of America’s massive appetite for crude oil comes from passenger vehicles. That means each Tesla or Chevy Bolt sold knocks out one of Big Oil’s best and most-reliable customer.

All of this combined with great strides in fuel-efficient cars has led oil execs to contemplate what was once-unthinkable: global oil demand could hit a peak.

“We will see peak oil. The question is: When?” said Brian Youngberg, senior energy analyst at Edward Jones.

It’s undeniable that electric cars have serious momentum. The number of electric vehicles surpassed 2 million in 2016, according to a report from the International Energy Agency, published on Wednesday. And major auto makers like Volkswagen, Ford (F) and Honda have announced ambitious goals to sell more and more electric cars.

But how many people do you know who own an electric car? Probably not many.

Electric vehicles only represented 0.2% of total light-duty vehicles on the road in 2016, the IEA said. Red-hot growth has also cooled a bit. Last year was the first time since 2010 that electric car sales growth dipped below 50%.

“The scale achieved so far is still small,” the IEA said.

That’s why the IEA concluded that electric vehicles “still have a long way to go” before reaching the scale needed to make a “significant dent” in global oil demand and greenhouse gas emissions.

Related: Elon Musk to Trump: You quit Paris, so I quit you

Consider these predictions from Morgan Stanley, a big believer in the potential of electric cars.

The investment bank predicted in a recent report that electric vehicles could account for an incredible 50% to 60% of global light vehicle sales by 2040. A world of “shared, autonomous and electric transport is coming,” Morgan Stanley analysts led by Adam Jonas wrote.

Yet the firm said it’s “surprisingly constructive” on oil demand, at least relative to the pessimistic views that have become more popular recently.

Why? The popularity of electric, self-driving and shared cars will make it much cheaper to get around in the future, causing the number of global miles traveled to double by 2030 and triple by 2040. That, of course, would ease the pressure on oil demand.

For its part, the oil industry is more focused these days on the appetite for oil from fast-growing economies like India and China. The thinking is that greater consumption in developing countries may offset weakening demand from the U.S. and Europe.

“That’s where oil demand will come from in the future,” said Youngberg of Edward Jones.

It’s also worth noting that the biggest energy companies like Exxon (XOM) and Chevron (CVX) have already diversified business models that allow them to hedge their bets a bit. A great deal of their business comes from natural gas, which helps power the power grid that electric cars tap into.

Exxon addressed the issue of electric cars in its long-term energy outlook report. Not surprisingly Exxon is more cautious on the future of electric cars, predicting they will only account for more than 10% of new car sales in the U.S. by 2040. Exxon also expects that oil and natural gas will still be the leading suppliers of global energy by 2040.

Yet even Exxon admits that new technologies and greater fuel efficiency will lead vehicle energy demand to “peak and eventually decline.”

Of course, long-term predictions are inherently hard to make.

One key question: how will the U.S. and other nations encourage the adoption of electric vehicles as a way to reduce carbon emissions? That mystery deepened last week when President Trump withdrew the U.S. from the Paris climate accord.

The future of electric cars also depends greatly on how fast Tesla and others can get the cost of the vehicles and battery storage down.

“Five years ago, we weren’t really talking about Tesla. So, who knows what we’re talking about in five or 10 years from now,” said Youngberg.