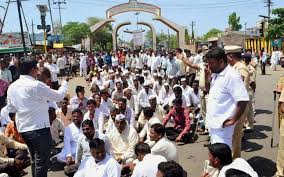 MUMBAI India’s Maharashtra state, home of the country’s financial capital Mumbai, agreed to forgive all loans held by farmers, who in turn ended a strike that had sent prices of vegetables and produce sharply higher.

It was not immediately clear how much the loan waivers would cost state coffers. Maharashtra state Revenue Minister Chandrakant Patil told reporters that a joint committee of government representatives and farmer leaders will be put in place to decide on the exact details and execution of the waivers.

Last week Maharashtra’s chief minister Devendra Fadnavis had said the government was willing to write off up to 305 billion rupees ($ 4.75 billion) in defaulted loans held by farmers.

That offer had been rejected by farmers, who had demanded a waiver of all loans, similar to the $ 5.6 billion in debt forgiveness announced by Uttar Pradesh in April.

Farmers accepted the new offer on Sunday, ending an 11-day strike by farmers that had curtailed supplies of vegetables and milk to cities, including Mumbai, and sent prices sharply higher.