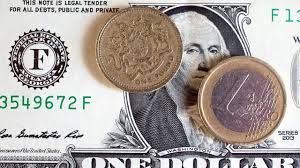 The British pound is trading sharply lower against the dollar Friday after voters in the U.K. delivered a stunning setback to Prime Minister Theresa May.

The currency sank more than 2% to trade below $ 1.27 after general election results showed that no single party had won enough seats to secure a majority in parliament.

The results raise major questions about whether May can remain prime minister and lead the country into vital negotiations on the country’s exit from the European Union, due to start on June 19.

“This is going to leave Theresa May struggling to keep control of the Brexit process,” said Kit Juckes, strategist at Societe Generale. “Can’t see how that’s helpful for the pound even if we are somewhat braced for a close outcome.”

London’s FTSE 100 gained about 1% in the first few minutes of trading on Friday. The benchmark index often moves higher when the pound weakens because many of the 100 biggest companies listed in London make their money overseas, and those profits will be worth more when brought back to the U.K.

The pound had been trading comfortably above $ 1.29 during the day on Thursday. That’s 14% lower than its level on the day of the Brexit referendum nearly a year ago. Since then it has traded as low as $ 1.20.

The situation where no party has a majority is known as a hung Parliament. It could plunge the country into a prolonged period of political uncertainty and horsetrading over the formation of a coalition government, or possibly even another election.

“On balance, the financial markets and the private sector would have preferred a Conservative majority to a Labour majority … and they definitely prefer stability to instability,” said Tony Travers, director of the Institute of Public Affairs at the London School of Economics.

“What this result suggests … is that there will be some instability and it will be hard for the British government to negotiate on Brexit.”

Related: U.K. growth was weakest in Europe in first quarter

Apart from dealing with Brexit — in itself the biggest challenge the country has faced since World War II — the new government has to address Britain’s acute growth problem.

The U.K. economy, which was until recently the strongest performer in Europe, has fallen to the bottom of the growth league, delivering weaker expansion in the first quarter than the other 27 members of the EU.

And while unemployment is very low, the country has been struggling with low wage growth since the global financial crisis. Wages fell in the three months to March, after taking inflation into account.

Brits have already endured nearly a decade of stagnating real wages. According to the independent Institute for Fiscal Studies, average earnings are still substantially below the levels seen in 2008, before the financial crisis.