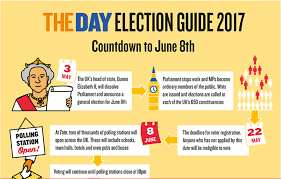 The prime minister had called the U.K.’s general election specifically to gain a mandate for negotiating Brexit on her terms, with a majority big enough for her to face down both a parliamentary opposition still sympathetic to remaining in the European Union, and a hard-line fringe in her own party hell-bent on a quick exit at any price.

But having lost her majority in the House of Commons, she finds herself in exactly the reverse position: her authority within the party is shot, and she (or whoever follows her as Conservative leader) will be wholly dependent on the grace and favor of other parties to gain approval for whatever deal the U.K. can strike with the EU. May has already promised parliament a “meaningful” vote on that deal.

None of the other parties is willing to back May’s dictum that “no deal is better than a bad deal,” her shorthand for accepting the risk of “cliff-edge” effects to the economy in 2019 when Brexit becomes a legal fact and the U.K.’s banks, carmakers and farmers all lose their current unrestricted access to the European market.

But while the new parliament is less able to pursue a “hard” Brexit consciously, its own internal divisions reduce its ability to agree to a negotiating position at all, which means that crashing out of the EU’s Single Market by accident in 2019 is a real possibility. And it is far more vulnerable to pressure from financial markets and business, which will hate the added uncertainty. The economy is already forecast by the Bank of England and most private economists to slow down this year and next, and sterling hit a two-month low overnight as the scale of the confusion became clear.

So the result strengthens further the already supremely strong hand of the EU. The question is what it will do with that position. The first signs from the EU are, unsurprisingly, uncompromising. The EU Commission’s top Brexit negotiator, Michel Barnier, oozed a confidence that was only restrained by the Commission’s own fear of a disorderly Brexit.

#Brexit negotiations should start when UK is ready; timetable and EU positions are clear. Let’s put our minds together on striking a deal
– Michel Barnier (@MichelBarnier) June 9, 2017

Meanwhile, Donald Tusk, who speaks on behalf of the EU’s other 27 governments, indicated no desire to make allowances for paralysis and confusion on the British side. And Pierre Moscovici, France’s top bureaucrat in the EU Commission, told the Europe 1 radio station that “Brexit has to take place….It’s not an optional calendar, it’s a calendar fixed in law.”

Under the EU Treaty, the U.K. will leave the EU in March 2019, two years after formally giving notice of its intention to leave. An extension to the two-year negotiation period is only possible with unanimity from the remaining 27 member states. Even before last night, that was seen by everyone except May’s governments as too short a timeframe to negotiate a comprehensive deal on trade arrangements and citizens’ rights. That now seems completely impossible.

“Two strong partners are confident, and will come faster and better to a conclusion that both sides can accept,” Günther Oettinger, a German EU Commissioner, told Deutschlandfunk radio station. “A weakened partner weakens the negotiations overall.”

The first round of formal talks between the EU and U.K. is slated to take place on June 19.

“We are ready…We will be tough but fair in our negotiations,” Oettinger said. “Whether the other side can even begin will have to become clear in the next hours and days, since if there’s no government—no negotiations.”

However, it looks likely that the U.K. will be able to at least form a government reasonably quickly. May will ask Queen Elizabeth on Friday for permission to form a coalition government, having agreed in principle to a deal with the Northern Irish Democratic Unionist Party. The Tories have 318 seats, the DUP 10, giving them a slim notional majority of six in the 650-seat legislature. That rises to 13, once you allow for the fact that Sinn Fein, the only other party in Northern Ireland to win seats last night, intends to continue its policy of boycotting Westminster (as its leader, Gerry Adams, said it would last night).

Read: The New York Times Is Offering a $ 6,000 Brexit Apocalypse Tour of London

But reliance on the DUP zeroes in on one of the most acute pressure points in Brexit: the fate of Northern Ireland. The DUP’s raison d’être has always been to keep the province in the U.K., while Sinn Fein wants to reunite it with the Republic. But even DUP leader Arlene Foster has misgivings about the “Hard Brexit” strategy pursued by May and her Eurosceptic colleagues.

“No-one wants to see a Hard Brexit, what we want to see is a workable plan to leave the European Union,” Foster told Sky News. “That’s what the national vote was about and therefore we need to get on with that, but we need to do it in a way that reflects the specific circumstances of Northern Ireland and of course our shared history and geography with the Republic of Ireland.”