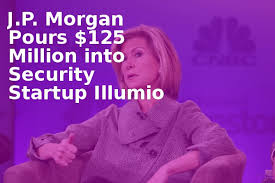 The asset management arm of J.P. Morgan is leading a $ 125 million investment in Illumio, a security startup based in Sunnyvale, Calif.

Illumio declined to comment on the company’s valuation following the latest funding round; however, data provided by Pitchbook, a market research firm, indicated that it had an estimated post-money valuation of $ 1.18 billion. According to Pitchbook, Illumio reached an estimated $ 1 billion post-money valuation after an earlier $ 100 million fundraising in 2015, thereby earning the company the title of a so-called unicorn startup.

Participants in the latest fundraising round, Illumio’s fourth or “series D,” include existing investors Andreessen Horowitz, General Catalyst, 8VC, Accel, and DCVC. The company has raised $ 267.5 million to date.

“I’ve always had the philosophy that you should fundraise when you don’t need it,” said Andrew Rubin, Illumio’s CEO and cofounder (not the Andy Rubin who created Google’s (goog) Android software), on a call with Fortune. He emphasized that the company had a strong balance sheet as a result of past fundraising, and said that the decision to raise now was merely “opportunistic.”

Illumio is deliberately unprofitable, Rubin said, as it focuses on soaking up a burgeoning category of the cybersecurity market known as “micro-segmentation,” which involves fine-tuning data access policies through software. IT managers can use Illumio’s tech to map out a data center network and to restrict or green-light connections between different computer systems, for instance.

Illumio has roughly 100 customers, including Morgan Stanley (ms), Salesforce (crm), Netsuite (n), and Workday (wday). The company had grown to about 175 employees from about 100 employees a year ago.

“Given the exponential growth of cybersecurity risks it’s clear that segmentation is now one of the largest market opportunities in enterprise software,” said Larry Unrein, head of private equity at J.P. Morgan (jpm) asset management.

Rivals in the market include VMware, vArmour, and CloudPassage.

“Illumio is really a brain, a software brain,” Rubin said, meaning that it controls the flow of information between network links. “We want our brain to become the central brain.”