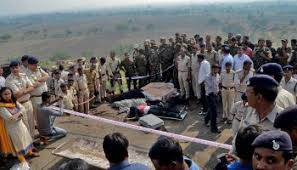 MUMBAI Five farmers were shot dead on Tuesday at a protest in Madhya Pradesh, according to news reports, marking an escalation of violence as a rural strike demanding debt relief spread.

The outburst of discontent in India’s heartland farming states of Madhya Pradesh and neighbouring Maharashtra poses a challenge for Prime Minister Narendra Modi, who has promised to double farmers’ incomes over the next five years.

The farmers were shot during a protest in the central city of Mandsaur. The spokesman of one farming union said police had fired on the protesters.

“Police started firing to disperse the crowd. Farmers were not carrying weapons,” said Gajendra Tokas of the Rashtriya Kisan Mazdoor Sangh, or National Farm Workers’ Union, which has called a state-wide strike on Wednesday.

The state’s home minister, Bhupendra Singh, said police had not shot at the protesters, adding: “Anti-social elements in the crowd fired bullets.”

Singh ordered an investigation into the deaths. “We have asked for details – how the firing started, how many people were killed,” he told CNN News 18.

State police said they could not confirm the toll.

Farmers last week started a strike in the state and in western Maharashtra, dumping vegetables and milk on the roads to demand billions of dollars in debt forgiveness and better prices for produce.

Fresh produce prices have more than doubled in cities such as India’s financial centre of Mumbai, which is the capital of Maharashtra, forcing authorities to provide police protection for vehicles carrying milk and vegetables.

In Madhya Pradesh, farmers burned vehicles on Monday night and Tuesday morning, said a police official, who declined to be identified because he was not authorised to speak on the record.

“The farmers have become violent over the last two days,” he added.

Some farm leaders called off their action after the states’ chief ministers said they would consider their demands, but others have stepped up efforts to block roads and damage public transport.

Maharashtra will waive the debts of distressed farmers before Oct. 31, Chief Minister Devendra Fadnavis said on Tuesday. It would cost the state 305 billion rupees ($ 4.7 billion) to write off debt owed by about 3.2 million farmers.

Two-thirds of India’s population of 1.3 billion depend on farming for their livelihood, but the sector accounts for just 14 percent of gross domestic product, reflecting a growing divide between the countryside and increasingly well-off cities.