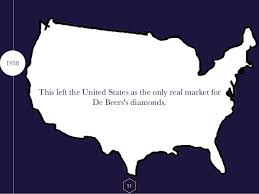 LONDON Indian diamond jewellery sales are rebounding after a fall of nearly 9 percent last year, while demand in the biggest market, the United States, has slowed in 2017 in line with muted economic growth, De Beers said on Friday.Broadly steady global diamond jewellery demand worth $ 80 billion in 2016 masked 4.4 percent growth in the United States and an 8.8 percent fall in India, where sales were disrupted by a jewellers’ strike and a government decision to withdraw high-value bank notes.

Major miner Anglo American counts on its business with De Beers, the world’s biggest diamond producer by value, to shelter its portfolio from volatile commodity markets as diamonds tend to hold value when basic raw materials fall in price.

While De Beers’ traditional focus is rough diamonds, the group is developing its presence in the high-margin diamond retail market through De Beers Diamond Jewellers’ retail network and the Forevermark high-end diamond brand, which had retail sales of around $ 750 million in 2016.

In the third biggest market India, Forevermark diamond sales have rebounded so far this year by around 70 percent versus a year ago, when a 19-day jewellers’ strike and the withdrawal of high-value notes limited sales.

Even considering the recovery was from an unusually low base, Lussier said in a telephone interview that Forevermark was outperforming a broadly steady diamond maket.

The United States’ diamond market has slowed slightly this year as expected economic growth has yet to materialise, he said without giving figures. Disappointing U.S. jobs growth numbers on Friday pushed the U.S. dollar lower.

The 2016 diamond data released on Friday, which De Beers publishes for the entire industry, found U.S. consumers last year accounted for around half of world diamond jewellery buyers – a level not seen since before the financial crisis – after five years of consecutive demand growth.

Engagement rings are central, but there is a growing trend for U.S. women to buy diamonds for themselves, which Lussier said was “a sign of economic empowerment”.

After the United States, the next biggest market is China, where demand growth rose by 0.6 percent in local currency last year and it continued to rise into the first quarter of 2017.